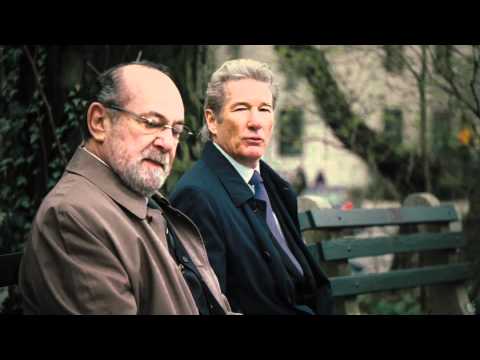 Billionaire businessmen portrayals and Richard Gere seem to be a natural movie fit these days. Gere, a handsome leading man for over 30 years has a long history of being in mainly successful films, and as he barely ages in contrast to the rest of us, those roles fit him like a $1000 pair of Gucci shoes or a $200 pair of patent leather gloves.

His latest film “Arbitrage” from first-time writer director Nicholas Jarecki, makes sure that his handsome visage is in practically every shot of the suspense/thriller/drama about a New York billionaire businessman who gets caught up in his own money-making schemes with other Wall Street billionaires; as well as the police on a homicide investigation.

Titans of the finance world tend (at least in the movies) to be insular, self-made, self-obsessed, arrogant-because-they can be, and are used to getting their own way thanks to their money.  In their world almost everyone can be bought for a price, and oh, yes, they always seem to have a sensational-looking young woman stashed away in an upper-scale NY condo that the wife and family know nothing about.  Well, we’ll see about that issue later.

In Jarecki’s banal and somewhat predictable “Bonfires of the Vanities” style tale, we meet New York hedge-fund magnate Robert Miller (Richard Gere) on the eve of his 60th birthday. He appears the very paragon of success in business and at home.  But behind the gilded walls of his mansion, Miller is in over his head.  He’s desperately trying to complete the sale of his business empire to a major bank before the depths of his hedge-fund fraud surfaces.

Struggling to conceal his duplicity from loyal wife Ellen (Susan Sarandon in a wasted role) and his brilliant daughter and heir-apparent Brooke (nicely played by Brit Marling), Miller is also balancing an affair with French art-dealer Julie Cote (Laetitia Castra) that I alluded to as “the stashed mistress”.  Just as he’s about to unload his troubled empire, and slip away scot-free, unexpected developments force to him re-evaluate his plans.  To help extricate himself from his self made Gordian knot predicament, Miller asks for the help of Jimmy Grant, a world-weary ex-con, and a face from Miller’s past (a fine understated performance from Nate Parker).

Miller’s one wrong turn, however, ignites the suspicions of NYPD Detective Michael Bryer (Tim Roth in a blatant and over-the-top Lt. Colombo impersonation – with none of the subtle tongue-in-cheek we got from watching Peter Falk over the years), who apparently has been reading too much Victor Hugo in his off-hours, and who will stop at nothing to get his man.

Which brings us to the “man”.  Richard Gere has always been an interesting actor to watch – he still is.  He has charm, charisma, and star quality, and more than that he’s an excellent actor.  I just wish “Arbitrage”, had been a stronger, more believable plot vehicle for his talent.  Gere deserves better. Also, I realize that the film will probably receive Oscar nominations: one for Gere, and hopefully, one for Nate Parker, and a couple for special effects. I’m not sure what that says about critics and their reviews (or the Academy, for that matter), but for me, the movie’s technical credits are stronger than Jarecki’s screenplay.

To loosely paraphrase Humphrey Bogart in the classic film “Casablanca”, the problems of billionaires in trouble and their privileged lives doesn’t amount to a hill of beans in today’s economically-challenged world of ordinary people.