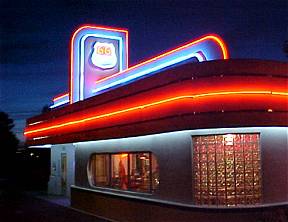 Route 66, also known as the Will Rogers Highway and Main Street of America, was one of the original U.S. highways established in 1926.  The highway runs from Chicago, Illinois, through MIssouri, Kansas, Oklahoma, Texas, New Mexico, Arizona, and California, ending in Los Angeles and covering 2,448 miles.

Route 66 served as a major path for those who migrated west, especially during the Dust Bowl of the 1930s.  People doing business along the route became prosperous due to the growing popularity of the highway.  Route 66 was later bypassed by the new Interstate Highway System, although portions of the road have been designated a National Scenic Byway. It has been recognized in popular culture by both a hit song and the Route 66 television show in the 1960s.

The California Route 66 Museum is located in Victorville