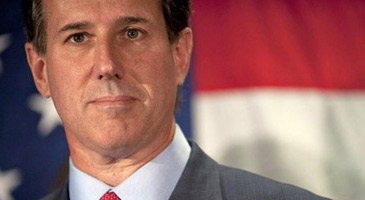 Democratic pollster Doug Schoen tells Newsmax that former Sen. Rick Santorum suspended his campaign today because he would have lost all “political credibility” for a 2016 run at the Republican presidential nomination had he tasted defeat next week in his home state of Pennsylvania.

“He dropped out because if he loses Pennsylvania, he loses whatever political credibility he has,” declared Schoen in an exclusive interview on Tuesday, as Santorum confirmed that he was suspending his campaign in an afternoon address from Gettysburg.

Schoen called the turn of events a “huge victory” for Mitt Romney; the former Massachusetts governor has had difficulty winning support among the more conservative GOP voters, who have helped Santorum to 11 primary and caucus victories.

“It takes the final roadblock away from his winning the nomination, with Newt Gingrich effectively having suspended his campaign” and Ron Paul not really a factor in the battle, said Schoen, author of the new book “Hopelessly Divided: The New Crisis in American Politics and What It Means for 2012 and Beyond.”

By suspending his campaign, Santorum also preserves the possibility of repositioning himself with Romney and the GOP establishment.

“While two weeks ago he said that Gov. Romney would have been the worst Republican in America to run, that worst Republican in America is going to be the nominee,” Schoen explained. “And he’s looking to curry a little favor and hopefully be in a position to run in 2016. If he lost Pennsylvania on April 24, he would have had no goodwill, and he would be a political nonentity.”

But Schoen said that Romney’s work is just beginning, as confirmed in a new Washington Post/ABC News poll released today, which shows him trailing President Barack Obama by a wide margin. “His negative rating exceeds his positive rating,” said Schoen, adding that it’s unclear whether Romney can overtake Obama even with Santorum out of the race.

“This is the beginning of the general election campaign, but make no mistake, Gov. Romney’s proven he’s nominatable. He’s yet to prove he’s electable and for Rick Santorum it was bowing to reality.”