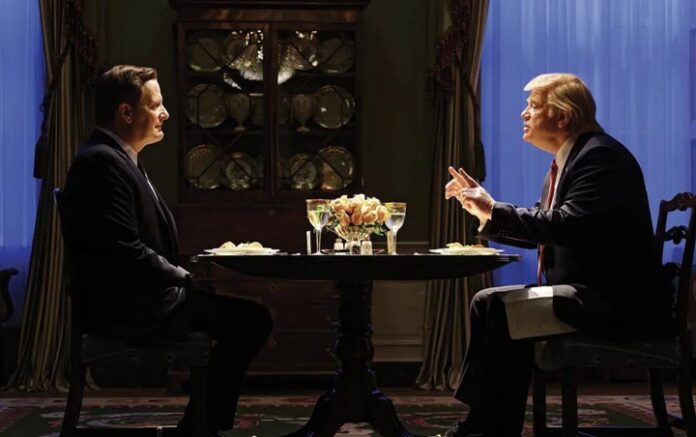 PART ONE:  The Comey POV

On the subject of “timing” in politics it is said that nothing is ever coincidental or random.  It’s always well thought out and planned for maximum impact; right down to the “leaks”.  Showtime TV channel premiered its long awaited two-part political drama series “The Comey” Rule”, on Monday and Tuesday, September 27 and 28, 2020.

It screened two nights before the 2020 Presidential debates that the country was salivating to see on practically every TV set in America.  Coincidence?  Or was it by design?  Television programmers are clever manipulators when it comes to maximizing audience ratings, and of course, monetizing their film product revenue dollars.  Regardless, “The Comey Rule” movie will no doubt please some and upset others depending on your political party affiliation and for its treatment and/or bias of its potent subject matter: The 2016 Presidential Campaign.

I prefer not to dwell on the public hullabaloo and the circus-like political firestorm surrounding the firing by President Trump of former FBI Director James Comey in May 2017.  Those are actual historic events familiar to all  I’m interested in seeing how this first rate, complicated, and very compelling movie by screenwriter and director Billy May, was able to pull-off the making of one of the most powerful, thorniest, and anticipated movies about the FBI verses the President of the United States of America, in a long, long, time.

There are echoes of the writing style and familiar character types that screenwriter/producer Aaron Sorkin created with the brilliant casts of individual and ensemble performances in his “West Wing” set–stories from 1999 to 20006.  That’s pretty heady company for comparison.  “The West Wing” garnered tons of awards in its seven seasons on TV.

In the film drama “The Comey Rule,” writer-director May bases his script on many sources.  First and foremost, however, is Jim Comey’s 2018 tell-all book “A Higher Loyalty: Truth, Lies, and Leadership”.   It is a principal source that has been fleshed out with authenticated facts, notes, memos, interviews with high level Washington insiders and political players on both sides of the aisle.  It provided rich anecdotal information for journalists who then authored books on the first three years of the Trump presidency.  The research and time spent on the script has been exhaustive in its veracity and plausibility.  Once again truth is indeed stranger than fiction.

There have been volumes written that include conversations from government eyewitnesses familiar with the Comey/Trump affair that led to Comey’s ultimate firing.  In short, there is a wealth of research to support May’s screenplay. But ultimately it will be the viewers who will determine the success of the film by an outstanding huge cast.

There are over seventy roles for actors in this compelling production, with fifteen of them playing themselves as journalists, White house staff, and elected or appointed government officials, culled from archival television footage of the 2016 Presidential Campaign. The sensational story is well documented with an ending already known to the audience who have been waiting four years for someone to offer clarity on what really has been going on with a group of people who are loyal to one man, and are sworn to “Omerta”-like secrecy to protect him.

James Comey, the ex FBI director is a truth-teller to power.  He’s a dedicated, decisive, intelligent, highly principled, FBI officer whose raison d’etre in life is the “Bureau” as it’s known in Washington D.C.   He’s a cool, composed, customer, when under stress, who “walks on water” in the eyes of his close knit staff of seven highly skilled analysts.

It’s impossible to list the many deserving actors who bring this potent motion picture to life.  However, there are always stand-outs:  Led by actor Jeff Daniels, fresh from his Tony Nominated Lead Actor performance on Broadway in “To Kill a Mocking Bird”, plays James Comey.

His portrayal is a study in how actor’s stay in the moment when story-wise, chaos is exploding all around them. It’s a finely judged performance that floats all the boats in Billy May’s highly-charged, politically explosive showdown with President Trump who is sensationally played by Irish actor Brendan Gleesen.  More about him later.

The main sticking point between Trump and Comey is the FBI director’s refusal to politicize the FBI for Trump’s “personal war” on his perceived enemies.  The president wants Comey to agree to a loyalty oath as a way of leveraging his cooperation when National Security Advisor Mike Flynn becomes compromised by Russian GRU agents and diplomats. A request for leniency for Flynn comes personally from Trump; asking Comey to let this pass as Flynn is “really a good guy”.  The FBI director eloquently refuses to let Flynn off the hook for his political indiscretions with Russia as a violation of FBI policy and rules. His decision, however, motivates President Trump to seek revenge.

The movie is about our newly practiced American politics; warts and all under Trump. It’s no more Mr. nice guys.  Just raw, brutal, win at all costs hard-ball.  The actors sound like characters from “The Soprano’s” in their portrayals at times.  The only prop missing in the “highlight” dinner scene between Trump and Comey as solo diners, was a baseball bat, a favorite “convincing tool” of Al Capone back in his day when his problems didn’t go away quickly enough. (Just joking; as the President often says these days). But mobsters over the years have had unique and odd ways of eliminating their competition.

The performance of actor Brendan Gleesen as President Trump, however, is no joke.  Unlike his Saturday Night Live (SNL) comedy sketch impression as Trump, Gleesen’s frighteningly menacing and thug-like portrayal is an eye opener. As the antagonist in the movie, Gleesen preens, glowers, and speaks in low breathy exchanges intended to intimidate.  It’s a highly nuanced, eerily, performed characterization, that will, no doubt, be discussed long after Mr. Gleesen moves on with his career. Great stuff from both Daniels and Gleesen.

Part One, was getting to know Comey, his supportive wife Patrice, sensitively played by Jennifer Ehle, and thanks to an old theatrical device of a character/interlocutor; in this case the duplicitous Rod Rosenstein, is deliciously played by Scoot McNairy in a performance that would please Shakespeare’s Iago.

I believe it’s safe to say that most American viewers are familiar with the term “drain the Swamp”.  Four years ago the incoming players promised to drain the swamp and ‘Make America Great Again’.  Some in the country are still waiting for that to happen.

Today, we have a politically divided country that appears to be doing very little to bring the nation together. Instead, we’re mired in partisan chaos, protests, looting, police violating their sworn oaths to protect the public and property from violence, random shootings etc.

Film director Billy May, and his inspired cast offer his view of the first three years under the presidency of Donald Trump. Part Two is a peek into the machinations of how our two-party democracy system works under Trump and his Republican party enablers.   The more the country knows, the more we become concerned as to just how much there is to know and how to handle that information when the American people begin to process the truth.