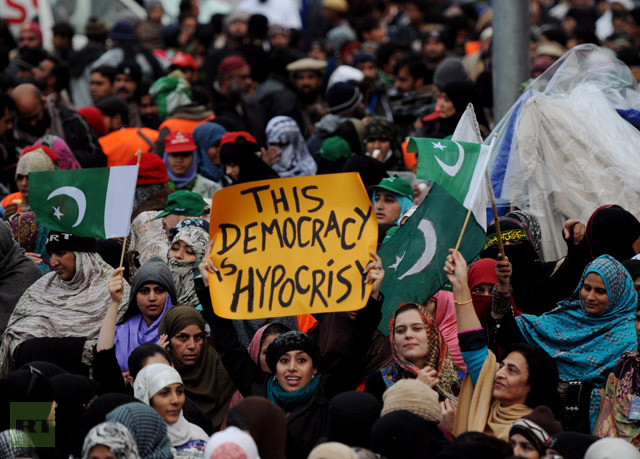 A team of Pakistani ministers and political leaders have reached a deal with protesters. The document provides for the dissolution of parliament and snap elections, RT’s correspondent in Islamabad reports.

RT’s Tariq Muhiyuddin says the parliament will be dissolved before March 16 and elections will be held in 90 days, according to the deal. The General Election Commission is also expected to see changes.

“We have reached an agreement,” Muslim Cleric Muhammad Tahir-ul-Qadri told supporters camped out near parliament. “Allah granted us a victory and now you can go home.”

Qadri, along with his supporters, has been staging street protests in the capital for several days calling on the government to resign.

On Thursday, Qadri and the goverment negotiators spent over four hours in talks. Emerging from the meeting, the cleric said an agreement had been reached and called it the ‘Islamabad Long March Declaration’.

He added that he would put a halt to the street protest in Islamabad. Once the document is signed by the PM, he will read it out at the main site of the protests, Jinnah Avenue.

Qadri delivered his speech from the heated and bullet proof container where he had been holed-up since the political crisis began four days ago. His supporters, many of them women and children, cheered in the pouring rain.

The deal may ease pressure on the ruling Pakistan’s People Party (PPP), which has come under fire for failing to tackle a range of problems gripping the country, including rampant corruption, a Taliban insurgency and a stagnant economy.

Thousands of Qadri supporters had been rallying in the Pakistani capital since Monday. The cleric calls for the removal of the government and denounces the politicians as corrupt thieves, accusing them of failing to fix severe energy and gas shortages. Qadri said he wanted the protest to continue until the government is dissolved and electoral reforms are introduced.

In an exclusive interview with RT, Tahir-ul Qadri explained why he is calling for a revolution and what his aims are.

“In Pakistan there is neither monarchical rule nor military dictatorship. There is electoral authoritarianism, electoral dictatorship. True democracy does not exist in this society, neither in the political field, nor in the social field nor in the economic field. No democracy.  We have to get rid of corruption and corrupt leaders,” he said.

He continued that eradication of corruption is crucial to the development of the entire Muslim world and all the third world.