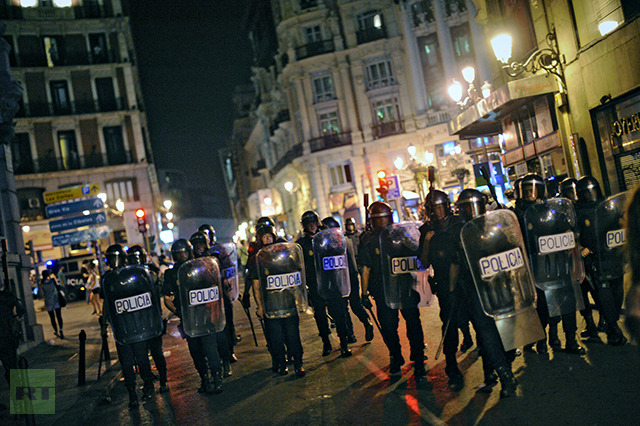 Spanish police have clashed with protesters marching against the latest batch of austerity measures. Over a million public employees, trade union members and fed-up citizens have taken to the streets in over 80 Spanish cities.

Violence erupted in Madrid around midnight after dozens of protesters reached the city’s Puerta del Sol square and clashed with riot police. Security forces used batons, rubber bullets and tear gas to disperse the crowd as it tried to enter the congress building located on the square. Some of the protesters lobbed bottles at officers.

In some urban areas, activists set trash cans on fire and tried to block police vehicle access with barricades of plastic bins and cardboard boxes. No injuries or arrests have been reported.

Demonstrators carried flags and banners decorated with scissors, symbolizing the country’s harsh spending cuts. The streets of Madrid were paralyzed by the boundless crowds of people bellowing“Hands up, this is a robbery!” An estimated 100,000 people participated in the demonstrations in the capital.

In Barcelona, similar scenes were reported. About a dozen protesters were arrested outside the local parliament building.

Eight firemen stripped naked in the northern town of Mieres near Oviedo. “With so many cuts we have been left naked,” declared a banner on the wall above them.

The demonstrations were organized by unions who have been outraged by the government’s new measures. One such measure is an end to Christmas bonuses for civil servants, which amounts to a 3.5 to 7 per cent reduction in annual pay.

“There’s nothing we can do but take to the street. We have lost between 10 and 15 per cent of our pay in the past four years,” demonstrator Sara Alvera, 51, a worker in the justice sector, told AFP.

“We are two and a half million votes. I hope they are thinking about that,” said Jose Luis Martinez, 52, who works at the interior ministry, told Reuters.

“We have to make some noise, because they’re making fun of us and of all working people,” said Iria, 34, an auditor in the treasury.