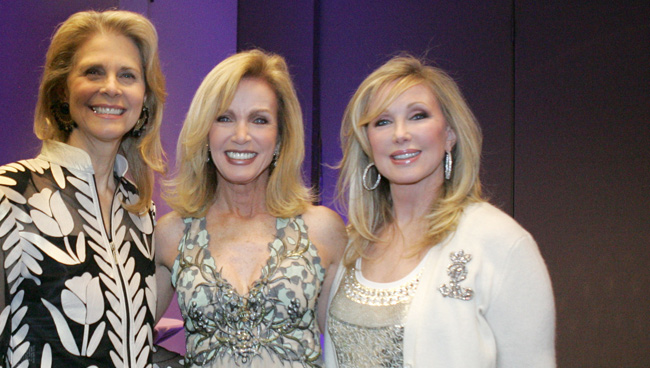 Palm Springs Convention Center was the Host of the Steve Chase 18th Annual Awards Gala on Feb. 11th. This Black Tie star-studded event is one of the biggest nights in the Desert with over 1500 guests attending. A large selection of almost 200 items were part of the Silent auction held during the cocktail hour.

Actress and Comedienne Joan Rivers hosted the event. This lady has many accomplishments such as Talk Show Host, Author and Columnist. Joan is noted for her use of the F-word, SHUT UP and off-color jokes that kept the audience laughing all thru the show.

Entertainment was provided by fantastic singers. Queen Latifah was in tears after hearing about the death of Whitney Houston but still sang a moving song dedicated to Whitney. Wynonna Judd sang ,I Want To Know What Love Is, in a way that only she can sing that song. Megan Mullally from Will and Grace was a surprise vocalist to many and David Burnham sang the final song with a host of back up singers.

Barbara Keller and Jim Casey co-chaired this fabulous event. They spoke about the strides being made in HIV/AIDS. There is still so much to be done. 1.5 Million dollars were raised for Desert AIDS Project that helps those afflicted with HIV/AIDS in the Valley

Jim Casey brought Annette Bloch on stage to announce her gift of One Million dollars for the Annette Bloch Research and Cancer Care Ctr. at DAP. Guests were asked to donate even more money to get this project underway as HIV/AIDS clients get cancer are a higher rate.

The evening brought out many stars to support this worthy cause. Donna Mills, Lindsay Wagner, Morgan Fairchild George Eads, Jurnee Smollett, Diahann Carroll and Ruta Lee to name just a few. DAP leaders David Brinkman and Curt Ringness along with DAP supporters filled the VIP room prior to dinner.

All Photos by Pat Krause Copyright 2012