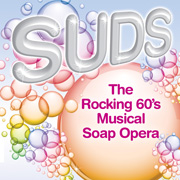 Palm Springs, CA – Coyote StageWorks plans to set the Annenberg Theatre spinning this February with their all-new production of SUDS: The Rocking 60’s Musical Soap Opera. SUDS, a delightful (and squeaky-clean) musical comedy, tells the story of Cindy, a lovelorn girl who is down on her luck, and working her fingers to the bone in a 1960’s Laundromat. Cindy owes the IRS a ton of money, her cat’s just been run over by a Corvair, and, worst of all, her pen-pal fiancée has dumped her for someone with better penmanship! Depressed beyond belief, she’s about to end it all, when, suddenly, her two guardian angels (in training) magically appear to teach her all about boys, true love, and how to survive in this tough, “fluff-n-fold” kind of world.

SUDS is an American Favorite that’s loaded with good clean fun, bubbling energy, and more than 40 chart-stopping favorites from the 60’s, including: Where the Boys Are, These Boots Are Made for Walkin’, Respect, I Feel Good, Walk On By, and Don’t Make Me Over.” The show toured the country, receiving rave reviews wherever it appeared from California to New York. It broke many box office records including the prestigious Old Globe Theater, Actors Theater of Louisville and the San Diego Repertory Theater. The award-winning cast in the Coyote StageWorks production of SUDS includes Larry Raben (Original New York, Los Angeles and London cast of FOREVER PLAID), Gwen Stewart (Original Broadway Cast of RENT), Bets Malone (Original Off-Broadway Cast of MARVELOUS WONDERETTES) and Samantha Mills (Numerous LA theater credits including SUDS, BEEHIVE and BYE BYE BIRDIE). SUDS opens at the Annenberg Theatre on February 7th, and runs through February 17th. Get your tickets, then get ready to Rock and Roll!