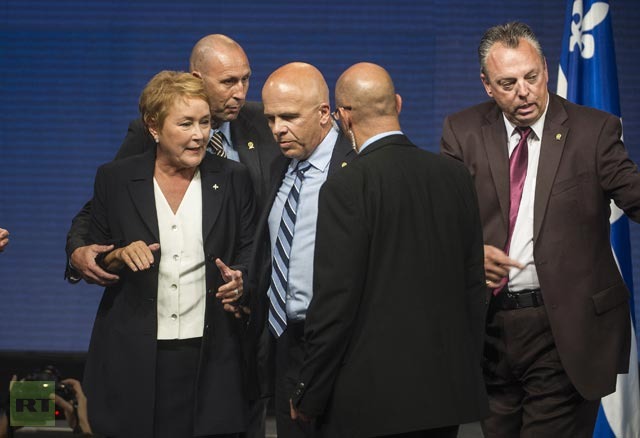 Police say 62-year-old Richard Henry Bain is the suspected gunman behind a deadly shooting at the victory party of Quebec’s newly-elected Premier, Pauline Marois. The shooting left one man dead and another person in critical condition.

A third person was treated for shock after the Wednesday shooting, Montreal police told Canadian media.

According to the Montreal Journal, Bain is the owner of a hunting and fishing shop in La Conception, Quebec.

As he was dragged to a police cruiser, Bain shouted, “the English are waking up” in French with a Canadian-English accent before adding in English that there would be “payback.”

Bain, who was armed an assault rifle and a handgun, started a fire behind the downtown Montreal venue where Marois’ supporters had gathered, Reuters reports.

Video has emerged, showing Bain in a blue bathrobe and black balaclava with a gun on the ground surrounded by police. The footage also showed Bain’s high-powered assault rifle.

Marois heads the separatist Parti Quebecois, which seeks independence for the French-speaking province of Quebec.

The premier-elect returned to the stage a few minutes after she left it, urging her supporters who packed the hall to leave calmly, stating that “there was a little unfortunate incident,” so as not to create panic. Everyone was evacuated and police are investigating.

“We don’t know what was [behind] that event,” police spokesperson Dany Richer told CBC. “Our investigators are going to meet with [the detained] overnight.”