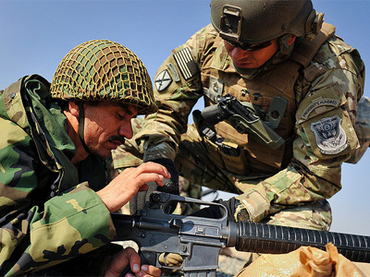 The spiritual leader of the Taliban said the group’s insurgents have succeeded in foisting the ranks of the Afghan security forces, allowing them to attack their fellow NATO service members. The admission comes amidst a rise in friendly fire attacks.

“Mujahideen have cleverly infiltrated the ranks of the enemy according to the plan given to them last year,” Mullah Mohammed Omar, the one-time de facto leader of Afghanistan, who is now believed to have taken refuge in Pakistan, said in a statement Thursday. “They are able to [safely] enter bases, offices and intelligence centers of the enemy. Then, they easily carry out decisive and coordinated attacks.”

The latest instance of Afghan security forces turning their weapons against US troops came in two separate attacks on Friday. In one of the attacks, an Afghan man who had been recruited to a the Afghan Local Police (ALP), a special security force for villages, shot and killed two US service members in the western province of Farah. He was later shot dead by other US troops. Just hours later, an Afghan soldier turned his gun on foreign troops in the southern Kandahar province, wounding two of them before being gunned down himself.

The so-called “green-on-blue” or “insider incidents” shootings are responsible for 13 per cent of foreign troop deaths in Afghanistan, the Long War Journal website reported.