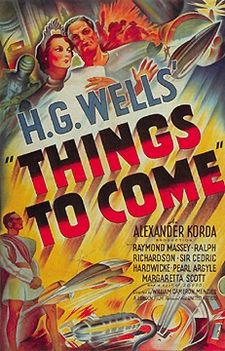 The DESERT CLASSIC FILM SOCIETY will be presenting the 1936 Sci-Fi classic THINGS TO COME by H.G. Wells on Friday, January 11  at 7 p.m. at the Bijou Cinema in Yucca Valley.

H.G. Wells’ startling vision of the future is presented in this ground breaking feature film.. This rare film print is uncut, and contains scenes that were previously deleted and are not seen on dvd.  H.G. Wells not only wrote the original book, he also wrote the screenplay and even designed the costumes(although we wish he hadn’t).

Mini-Lecture before the films will be presented by National Public Radio Film Critic Randy Fischer.

WANT ADMISSION FOR 25 CENTS???  Since movie tickets in the 1930’s and 40’s could be bought for 25 cents we will give you admission for 25 cents in change if the coins are silver(that means dated before 1965).

The Bijou Cinema is located at 57482 Onaga Trail in Yucca Valley.  Admission is $5 per person.

For information and to join the society go to the website www.meetup.com/DESERT-CLASSIC-FILM-SOCIETY   Seating is limited.  Reservations are recommended and can be made on the website.  There is no charge to become a member .       The DESERT CLASSIC FILM SOCIETY is  a Non-Profit  501 (c) (3) Organization.