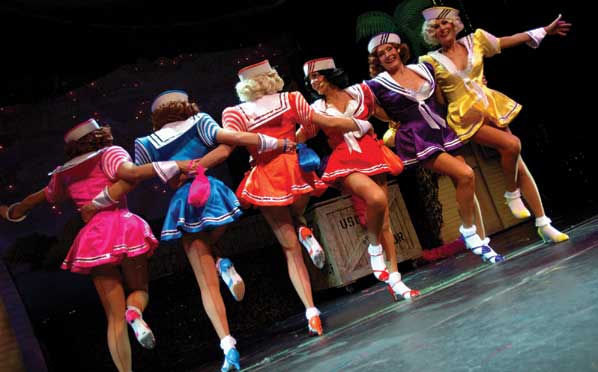 Palm Springs, California (February 24, 2012) When you think of ‘50s music and that era’s chart-topping doo-wop groups, The Diamonds immediately come to mind, with such unforgettable hits as “Why Do Fools Fall In Love?”, “Little Darlin’” and “The Stroll.” Now, over 55 years since the first of their 16Billboard hits, this Hall of Fame vocal group makes its Follies debut March 13 – May 20, 2012.

It all began in 1953 when a sound engineer with the Canadian Broadcasting Corporation met three talented, young Toronto men who liked to sing as much as he did, so they formed a stand-up quartet. Their first performance was in a church basement singing in a Christmas show. The audience’s reaction to the clean-cut group was so tremendous that The Diamonds decided they would turn professional that very night.

After 18 months of rehearsing and performing wherever they could, the quartet competed on the Arthur Godfrey’s Talent Scouts television show and tied for first place. Their prize was appearing as guest artist for a week on the show A Mercury Records contract soon followed.

The Diamonds’ first recording for Mercury was “Why Do Fools Fall in Love“, which reached #12. Their follow-up hit single, “The Church Bells May Ring”, reached #14.

Their biggest hits were 1957’s “Little Darlin’“, the first of their three Gold Records, and 1958’s “The Stroll“, an original song written for the group by Clyde Otis. Based on an idea of Dick Clark’s, “The Stroll” became a huge dance craze, directly due to The Diamonds’ many appearances on American Bandstand.

Today, the quartet is comprised of Gary Owens, 60; Jerry Siggins, 64; Jeff Dolan, 53;and Shawn Stevens, 53, who continue proving the durability of their distinctive brand of classic rock-and-roll, which Plaza Theatre audiences can now experience for themselves.

About the Fabulous Palm Springs Follies:

During its 21 seasons, The Fabulous Palm Springs Follies has been seen by nearly three million patrons, and celebrates the music and dance of Mid-Century America with a cast ranging in age from 58 to 82 years “young.” The show features lavish, Broadway-caliber production numbers, and plays five days a week from November through late-May. In 1997, it was the subject of an Oscar-nominated short documentary entitled Still Kicking: The Fabulous Palm SpringsFollies. The show is housed in downtown Palm Springs’ historic Plaza Theatre, a charming, neon-encrusted old movie house, which is an attraction itself. Tickets may be purchased by calling the Box Office at (760) 327-0225 or online at www.psfollies.com.