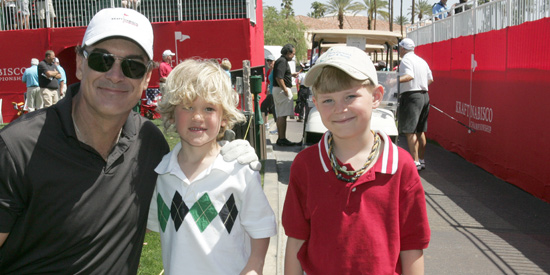 The DINAH as many people know it is the Kraft Nabisco Championship LPGA Major and is played at Mission Hills Country Club. The Celebrity Pro-am is always played on the first two days of the tournament. On Tuesday and Wednesday, March 27th and 28th. Over Thirty Celebrities participated. Several have played in this tournament for many times and continue to come back year after year.

The Pro-Am was held on the Dinah Shore Course with the first tee time at 7:20 in the morning. Play lasted most of the day. Celebrities could be seen at the driving range and the putting green before play. Many signed autographs on the first tee before they teed off and during play. The celebrities really enjoy this tournament. The pros like to play with these high profile celebrities too.

These two days give fans a close look at celebrities and LPGA pros. It is a more laid back time for fans when there is not so much at stake for the players. Cameras are allowed and Autographs are given. The actual tournament starts Thursday March 29th and ends on Sunday April 1st when only the pros will play.