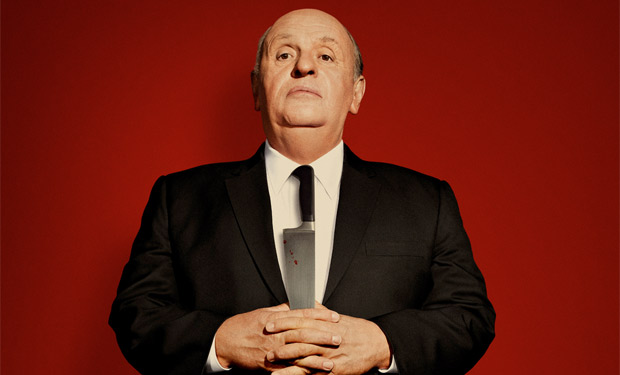 When one does a biopic about Alfred Hitchcock, one of the most influential movie directors of all time, that film had better have a lot of details about his life, and had better be loaded with here-to-fore unknown bits and anecdotes about what’s going on inside his gifted, but quirky mind.  To do otherwise, makes for a somewhat boring 98 minutes of watching the great man of suspense and thrillers become a victim of his own reputation, to say nothing of wasting the talents and gifts of Anthony Hopkins as Hitchcock, and those of the great Helen Mirren as Hitch’s wife, Alma Reville.

The screenplay written by John J. McLaughlin, based on the book “Alfred Hitchcock and the Making of ‘Psycho’”, by Stephen Robello, is dully and confusingly directed by Sacha Gervasi.  The story revolves mainly around the making of Hitchcock’s famous film “Psycho”.  The “film within a film” device attempts to serve as a way of understanding Hitchcock’s so called Freudian obsession with blonde leading ladies in his many films.   However, the movie never explores the fetish or provides a satisfying answer to the premise.  All we see is Hopkins, as Hitch, chewing the impersonation and giving the audience a peek into  voyeuristic tendencies by installing a peephole into the dressing rooms of his actresses.

The story, such as it is, flails about looking for some semblance of a believable plot-line that is associated with the master of suspense.  Instead of a compelling, and engaging story-line McLaughlin chooses to invest his script with a cast of predictable characters (Yes, I know the story revolves around real-life Hollywood names).   However, it’s not the fault of the actors that many of them appear vapid and colorless.  It’s the industry that they work in that makes them appear so.  At least, Mirren looking trim and terrific, can always be counted on to give a first rate effort, which she does.

The search, so to speak, for a subplot utilizing Mirren and Danny Huston as a B-grade movie writer/director looking to hawk his script to Hitch via Alma, is weakly drawn.  It’s also predictable, and is an unworthy ploy, which should have gone back to rewrite before filming began. The film lacks energy and … well,dare I say it … “suspense”.  It’s about Alfred Hitchcock for crying out loud.     One of the best things about “Hitchcock”, beside the photography and costumes, is the luminous performance of Scarlett Johansson portraying Janet Leigh.  She lights up each and every scene in which she appears, even the famous shower-stabbing scene.  Toni Collette as Peggy Robertson, Hitch’s right arm on the set; Jessica Biel as Vera Miles; and James D’Arcy as Anthony Perkins/Norman Bates, fall on their respective swords in this mish-mash of a “tribute” to the great master of filmmaking.

Forget the Hollywood PR hype.  This is not “Best picture of the Year” material.  If Hitchcock were alive today, he would groan at the amateurish, venal, and non-engaging movie that bears his famous name.