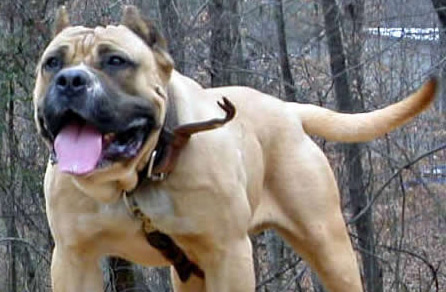 Dog fighting–brutal, inhumane, uncivilized, unspeakable dog fighting– was not only legal in colonial America, but it has also sanctioned and promoted. The practice of pitting two dogs against each other until one is either killed or so grievously injured it can no longer defend itself, continued in America without notable outcry or punitive repercussions into the late 1800s.

At the beginning of the 1800s, English dog breeders were busy mixing breeds to develop the Staffordshire Bull Terrier–aka pit bulls–and it is thought the first pits were brought to America in 1817. Today, pit bulls are still the most widely abused (and maligned) dogs enslaved within the insidious world of underground dog fighting; however, since the much-publicized dog fighting bust on pro footballer Michael Vick, it appears the face of dog fighting is evolving. Dog fighters have begun to expand their selection of warrior-victims to the larger, more muscular Argentine Mastiff and the Presa Canario.

The Presa Canario most likely evolved through the breeding between the now extinct Bardino Majero of the Canary Islands, and English Mastiffs imported from Britain. Sadly, these big fellas were bred specifically for dog fighting.  They stand just over two feet tall and average between 80 and 130 pounds. Extremely pack oriented, they are not suitable for the average pet owner.  While the Argentine Mastiff is exclusively white in coloring, the Canario may be fawn colored or brindled.

Dog fighting has been illegal in all 50 states since the 1860s.  California Penal Code 597.5 states that any person who engages in the following activities is guilty of a felony, and may be imprisoned for 16 months, two years, or three years (depending on the offense), and/or fined up to $50,000. It is a felony to:

1. Own, keep, or train a dog with the intent of using that dog for the purpose of dog fighting.

2. Intentionally cause any dog to fight with or injure another dog.

3. Allow any form of dog fighting or dog-on-dog violence on your property.

In addition, the penal code state that anyone on the premises of a place intended for dog fighting for the purpose of assisting or watching the fight, may be imprisoned up to one year in a county jail, fined up to $5,000, or both.

If you suspect someone of engaging in, or preparing to  engage in, dog fighting or any other form of animal abuse, document the time, place, and incident of the suspected offense, and contact The Riverside County Department of Animal Services at760.343.3644. Their Coachella Valley headquarters are at the Riverside County Animal Shelter, which is located next to Animal Samaritans’ veterinary clinic on the Animal Campus in Thousand Palms.