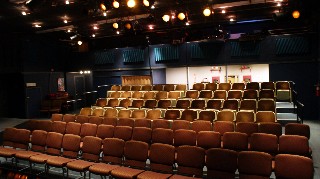 The special Four-Chamber event, hosted by the Yucca Valley, Twentynine Palms, Joshua Tree, and Morongo valley Chambers of Commerce, will feature the announcement of the much anticipated 2013 Theatre 29 season of live theatrical productions. The season announcement Gala will take place at the spectacular “Friendship Hall” of the Joshua Tree Retreat Center (formerly Mentalphysics) in Joshua Tree from 5:00 PM until 7:00 PM Wednesday, September 12, 2012.

Business people and individuals from the Yucca Valley, Twentynine Palms, Joshua Tree, and Morongo Valley communities of the Morongo Basin will have a very rare chance to network, get together and discuss business growth and mutual cooperation. Each of the chambers will give a brief presentation on their economic development activities as well as give a snapshot of their upcoming events and benefits of membership. The Four-Chamber event offers a unique opportunity to forge valuable business relationships amongst the Morongo Basin family of communities.

There is no charge for the season Announcement Gala event. The Joshua Tree Chamber of Commerce will be serving beverages, including beer and wine as well as soft drinks as a fund-raiser. A large selection of complimentary deli delights will also be served to those in attendance by Theatre 29 Board members and volunteers.

Theatre 29 Board President Brian Tabeling will host the event, welcoming those in attendance and starting the presentation and announcement of the three Musicals, Classic Murder Mystery, a Special children’s production, and Classic Holiday presentation as well as the updated “Halloween Haunt” planned for 2013.

With sell-out audiences clamoring for seats at Theatre 29, the season announcement event will give only those in attendance the opportunity to secure season tickets first. Season tickets offer theatre-goers a reserved seat to all six of the 2013 stage productions as well as a special Halloween Haunt event in October.

At the Announcement, each of the seven directors selected for the Theatre 29 2013 season will give a sneak peek of their individual shows with featured performances and descriptions. The new 2013 season will not be revealed until the night of the Gala event.

Theatre 29 has been producing a full season of Quality, family-friendly local live theater entertainment since 1999. They are an all-volunteer 501(c)3 tax-deductible non-profit organization. Theatre 29 is located at 73637 Sullivan Road in the City of Twentynine Palms.

For more information on the season announcement event, or Theatre 29, call Board President Brian Tabeling 760-367-9338.