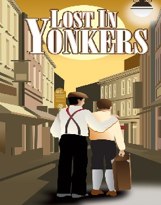 Theatre 29 and Director Rebecca Havely have completed the casting for the 2nd show of the 2012 season, Neil Simon‚s “Lost in Yonkers.”  The comedy will open March 9 and run five weekends though April 7, 2012.

By America’s great comic playwright, this memory play is set in a Yonkers in 1942. Bella, is 35-years-old, mentally challenged and living at home with her mother, stern Grandma Kurnitz . As the play opens, ne’r do-well son Eddie deposits his two young sons on the old lady’s doorstep. He is financially strapped and taking to the road as a salesman. The boys are left to contend with Grandma, with Bella and her secret romance, and with Louie, her brother, a small-time hood in a strange new world called Yonkers.

Havely, a multi-award winning actress and director making her directorial debut at Theatre 29, has assembled a talented cast of veterans and newcomers to the non-profit Community Theater‚s stage.

Playing the quirky Grandma Kurnitz, is veteran actress Sue Kelly. As Aunt Bella. No stranger to the stage but making her Theatre 29 debut, is Stephanie Gillham. Making his acting debut As Uncle Louie is Joshua Tree resident and violinist, Tim Kelly. Eddie Kurnitz will be played by Jericho McWilliams (you may remember him as Sister Mary Amnesia in the recent production of Nunsense Amen). As young Jay Kurnitz, the talented Jarod Burks. As younger brother Arty, Vincent Thomas takes the role for the majority of the run with Theatre 29 favorite, Cyrus Short understudying and performing one weekend. Aunt Gert, portrayed by Judy Andershak, will be another shared role‚ Marty Nieder will fill in for opening week end. Rounding out the cast are Candy Shop patrons including, Wendy Lane, Charlotte Havely & Darren Sheffield.

Theatre 29 is located at 73637 Sullivan Road, (right around the corner from Barr Lumber) in the City of Twentynine Palms.