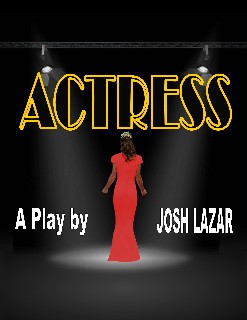 Theatre 29 will present the second of their special “Original Play” series on two consecutive Thursday Friday and Saturdays, at 7:00 pm August 3,4,5 and 10,11,12. The play, “Actress”, by Twentynine Palms resident Josh Lazar will make its West Coast debut at the Morongo Basin’s premiere live theater venue.

“Actress” was developed at the Ensemble Studio Theatre in New York, won the Connecticut Playwrights Festival Award, and was produced at the Church Street Theatre at the Edinburgh Fringe Festival.

Lazar is a lawyer, high school English teacher, journalist and playwright. “Actress” is his first play. Other plays which have been performed in Los Angeles include “Mammitus”, “Before Santa Claus”, “Confession”, “The Apartment” and “The Letter”. His most recent play, “Brooklyn Y”, won the Best Comedy award last year at the Playwrights Express Festival at First Stage Theatre Company in Los Angeles.

Lazar and his wife Kathy, also a lawyer, have been avid Theatre 29 goers for years and were thrilled when Actress was selected for the 2012 season.

Lazar comes from a family immersed in theatre. His mother had roles on and off Broadway for several years, including in “I am a Camera,” and his uncle, Steven Hill was a noted TV actor and the original lead in the Mission Impossible TV series.

Lazar said, “”Actress” was written as homage to world of theatre, and the tortuous road that actors travel in pursuing their dreams. “Actress” is also about giving up those dreams, and the road to self-acceptance. If there is a motto to the play, it is this: You can achieve anything, as long as you are willing to pay the price to get there”.

In the play, Sparks fly when the younger “prodigal” daughter of a conservative local judge, who ran away from her small home town in Minnesota to become an actress in Hollywood, returns after 10 years to star in the town theatre’s production of the same play her talented older sister, who gave up acting to marry a farmer, starred in her senior year in high school. Old wounds resurface, rivalries ignite, and each character must come to terms with the truth of their own past before the curtain descends.

In June, Theatre 29 debuted their special Original Play series with “The Memory Jar” by Kurt Schauppner in an effort to give local playwrights an opportunity to see their work on stage and allow area audiences to see compelling new theater. Now, with “Angel”, Josh Lazar brings his prodigious talent to the Twentynine Palms stage to complete the series.

Theatre 29, a 501 ( 3 ) non-profit all-volunteer Community Theatre, is located at 73637 Sullivan Road, (right around the corner from Barr Lumber) in the City of Twentynine Palms.