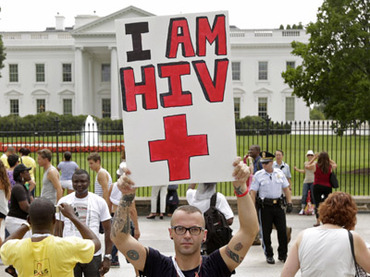 More than a dozen protesters upset with US President Barack Obama’s inclusion of America in the proposed Trans-Pacific Partnership trade deal were arrested at the White House on Tuesday at the tail end of an AIDS march on the nation’s capital.

A march held in conjunction with the International AIDS Conference occurring this week in Washington, D.C. ended with 13 protesters being arrested in front of the president’s Pennsylvania Avenue home. According to an early report published by the Huffington Post, police detained the protesters for hanging AIDS ribbons the White House fence and then refusing to clear the adjacent street.

Thousands of protesters led their march down the city’s K Street and to the north side of the White House in order to voice their grievances with the Trans-Pacific Partnership, or TPP, an international trade deal that could come with mass implications for around the world if passed. Along with Brunei, Chile, Singapore, New Zealand, Australia, Peru, Vietnam, Malaysia, Mexico and Canada, the United States has signed on to be a part a roster of negotiating nations that now includes 11 countries. Critics fear, though, that the TPP passing could pose grave dangers for Americans that rely on prescription drugs.