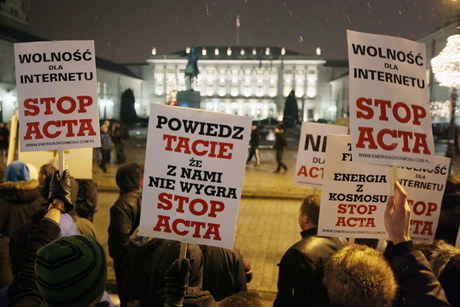 Poland is bracing for a new day of protests against a copyright agreement signed by Warsaw on Thursday. Opponents staging demos and hacker attacks say the ACTA treaty amounts to internet censorship and gross violation of human rights.

In order to become law, the Anti-Counterfeiting Trade Agreement must first be voted in by parliament. In a bid to stop this from happening, the hacktivist group Anonymous has targeted official websites in the countries that have already signed it. They struck the Polish, French and Czech government websites, as well as the sites of the Irish ministries of justice and finance, the European Parliament, Ireland’s Innovation Minister Sean Sherlock and Polish Prime Minister Donald Tusk.

In Poland, the cyber-offensive has sparked massive protests since Tuesday. On Thursday, tens of thousands flooded onto the streets, with demonstrators clashing with police in Kielche. With public anger still high, the demos are expected to continue.

Anti-ACTA sentiment reached the Polish parliament, too, where some opposition MPs put on Guy Fawkes masks to signal that they won’t vote for an agreement that has drawn so much criticism from citizens.

Anonymous is threatening that it will reveal sensitive information on officials, should Poland proceed with adopting ACTA. Prime Minister Tusk called the demos and hacker attacks “blackmail”.