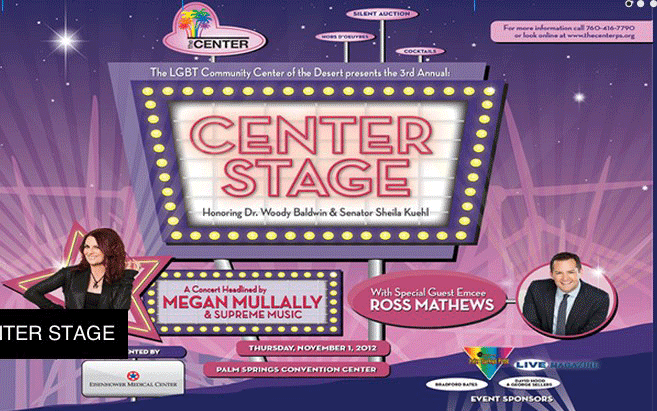 Fans of award-winning actress Megan Mullally, best known for her hysterically funny role as “Karen Walker” from the hit NBC series Will & Grace, will be in for a delightful surprise when she sings with her band, Supreme Music Program, and performs songs from her recent albums: The Sweetheart Break-In, Big as a Berry and Free Again.

“This will be a sold-out concert,” said John O’Connor, Executive Director of The Center. “With so many people stepping up to be sponsors of this event, it is definitely going to be one of the highlights of the Coachella Valley social season, and a fun kick-off event to Palm Springs Pride weekend.”

Emceeing Center Stage will be Ross Mathews, a regular on Chelsea Lately and The Tonight Show. Mathews has been entertaining audiences on television since 2001 where he has interviewed some of the biggest stars and has made the nation laugh all the while.

The Center is also pleased to announce that Dr. Woody Baldwin of Austin, Texas, founder of the Prime Timers Worldwide, will receive the Founder’s Award, and Senator Sheila Kuehl of Los Angeles, and currently the Founding Director of the new Public Policy Institute at Santa Monica College, a Distinguished Policy Fellow at the UCLA School of Public Affairs and a Horizon Institute Fellow, will receive the Leadership Award.

“We are so excited to have such an incredible range of accomplished honorees and entertainment,” said O’Connor. “The support for this line-up and the work of The Center is overwhelming. Eisenhower Medical Center, The Center’s Health Partner, along with Wells Fargo, have signed on to be a Presenting Sponsors.”