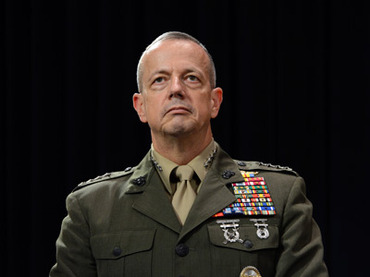 The US head of NATO forces in Afghanistan is under investigation in connection with the sex scandal that saw CIA director David Petraeus resign. Gen. Allen exchanged “inappropriate” emails with a woman linked to Petraeus.

The FBI has found 20,000 to 30,000 pages of potentially inappropriate emails and documents between General John Allen and Jill Kelley, says the Pentagon. Investigators are now searching through the documents for any compromising information.

Mrs. Kelley was implicated in the Petraeus affair after telling the FBI she received threatening emails from the former CIA chief’s mistress, Paula Broadwell. Jill Kelley is a long-term friend of the Petraeus family and works as a “social liaison” at an air force base in Tampa, Florida.

US Defense Secretary Leon Panetta ordered an investigation be opened into the matter on Sunday. He also called for Allen’s nomination to be made Commander of US European Command and Supreme Allied Commander Europe to be frozen for the time being. He was due to face a Senate hearing to assess his nomination on Thursday.

General Allen has denied any wrongdoing and will remain at his post until further notice.

Panetta praised Allen’s work in Afghanistan and said that “he is entitled to due process in the matter.”

“While the matter is under investigation and before the facts are determined, General Allen will remain commander of ISAF,” said Panetta in a statement.

CIA director David Petraeus admitted he had been embroiled in an extramarital affair with the author of his biography, Paula Broadwell, and resigned on Friday.