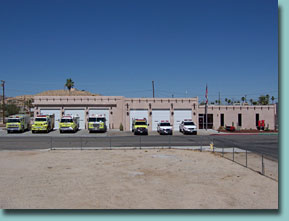 Two Morongo Basin Rotary Clubs, representing business and professional men and women from both the East and West ends, are stepping up once again to continue a time honored tradition of honoring area firefighters.

For many years, the Twentynine Palms Elks lodge sponsored a firefighters awards banquet which recognized the “Firefighters of the Year” from the east end communities. The top firefighters from Wonder Valley, the Marine Base, Twentynine Palms, and Joshua Tree were named by their respective chiefs. The honorees were given distinctive trophies and attendees were feted to dinner and then a dance after the ceremonies.

In 2008, the event was greatly expanded to include all of the “West end” fire personnel as well. The Rotary Club of Twentynine Palms and the Rotary Club of Yucca Valley, Noon, stepped in to organize the now much larger event, and a new tradition was born! Over 200 firefighters, supporters, and community leaders gathered for the new festivities, now including all of the Fire Agencies in the area stretching from Morongo Valley on the West to Wonder Valley on the East.

For 2012, Former Yucca Valley Rotary Club President Shannon Luckino stepped up to the plate to chair the event, Twentynine Palms Fire Chief and Rotarian Jim Thompson is assisting. All of the area Fire Agencies, local, county, state, and federal, have agreed that a Morongo Basin wide event honoring the valuable work of all the fire stations is a good idea and have agreed to participate.

The Two Rotary Clubs are taking on the sponsorship of the awards event as a community service project, which honors the hard work and sacrifice of firefighters from all eight Morongo Basin fire stations.

The Firefighters awards dinner and dance will be held Saturday March 10, starting at 6:00 pm at the Bell Center at Copper Mountain College, 6162 Rotary Way, Joshua Tree. The dinner will see the Chiefs of the eight agencies present “Firefighter of the Year” honors to personnel from Twentynine Palms, Morongo Valley, The Combat Center, the state CalFire and  Blackrock Federal stations in Yucca Valley, and County fire stations in Wonder Valley, Joshua Tree and Yucca Valley.

The Rotarians will supply the dinner, catered by Bruce‚s Coyote kitchen at Copper Mountain College, at no charge for firefighters and one guest for each honoree. They will also provide the distinctive awards specially designed by “Trophy Express” in Yucca Valley.

Z107.7 Radio personality Gary Daigneault will serve as the Master of ceremonies for the event. The Z107.7 “Mobile DJ” is donating the sound system and entertainment for the event.

The committee will be inviting area VIP‚s to join them in honoring the eight “Firefighters of the year”.

Tickets will only be sold in advance of the event at $25.00 each. Tickets or more information can be obtained by calling Luckino at 760-333-0053 or at Luckino@aol.com.