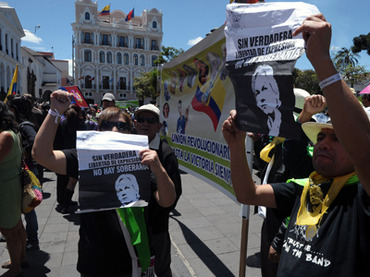 Ecuador is still concerned over the UK’s threat to storm its embassy in London. In an exclusive interview to RT, the country’s Foreign Minister Ricardo Patino said that Ecuador will not tolerate what it sees as a clear breach of international law.

RT: What does Ecuador think about the huge support it has received from ALBA and UNASUR countries, apart from the support of many social movements and activists who spoke in favor of giving Julian Assange political asylum?

Ricardo Patino: We are grateful for the immediate support we received from the foreign ministers of Latin America, Caribbean states and ALBA member states. We got convincing and prompt support from ALBA and UNASUR countries. We hope to get the same kind of support on Friday at the meeting of the Organization of American States members.

We had the support of the Forum of Sao Paulo that includes left-wing parties from across Latin America and the Caribbean and other political bodies such as COPAL and the Socialist International organization. So almost all the left-wing or centrist or leftist-centrist parties took the side of the Ecuadorian government.

It is also worth saying that such people as Michael Moore, Oliver Stone and Nobel Peace laureate Adolfo Pérez Esquivel backed our decision to grant political asylum. They stood up against the blatant threat of the UK to raid the Ecuadorian embassy and arrest Julian Assange. We are grateful for this support.