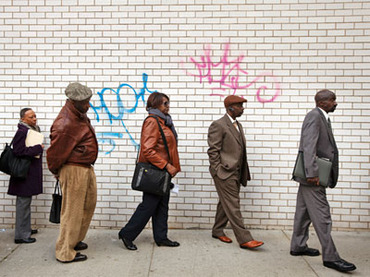 Month after month, dismal jobs numbers are released from Washington and quickly spun to either enhance the image of the Obama administration or attempt to smash it. This month, though, there’s only one way to look at the figures — and it’s bad.

The US Department of Labor released employment statistics for the month of May on Friday, and almost every figure factored into their report suggests that the recent stabilization of the jobs market was only a momentary one. After the unemployment rate under the presidency of Barack Obama skyrocketed last June to its highest during his first term — 11.3 percent — numbers released since have led many to assume that the recession of yesteryear was finally behind the country for good.The report published by the Labor Department Friday, however, includes some not so optimistic information.

The unemployment rate for the month of May 2011 is clocked in at 8.2 percent, according to the new report, signaling a surge after April’s figure of 8.1 percent marked the best numbers America has seen since Barack Obama entered the White House in January 2009. After having the bulk of his presidency marred by grave jobs figures, April was viewed by many as a turning point that would take the country back out of the hole. Once again, though, the unemployment rate is back on the rise.

The May report also reveals that only 69,000 new jobs were added to the workforce last year, the weakest statistic that category has seen  this year. January and February saw the job creation count at 275,000 and 259,000 respectively, but it’s been a fast paced deceleration since — only 143,000 jobs were created in March and barely half of that in April.

“Three years after the recession, why hasn’t the jobs picture improved?” asks Cleveland Federal Reserve President Sanra Pianalto in a statement released Thursday. “The recovery has been too slow to prompt companies to hire.”

“There just simply isn’t enough growth in the economy to support job growth at a higher level,” Keith Hall, former commissioner of the Bureau of Labor Statistics, adds to the Washington Post.

Earlier this year, overly optimistic attempts to disregard gloomy statistics could be blamed on teetering numbers not directly related with the actual unemployment rate. For example, fluctuating figures related to the number of people entering and leaving the workforce and the underemployment rate can have dire effects on the economy while not as well reported in articles that address the actual unemployment rate. In December 2011, the Obama administration patted itself on the back for reporting an 8.6 percent unemployment rate for the country during the month before. And while 120,000 jobs may had been created in November — more than April 2012 — 315,000 Americans just flat out abandoned their job hunt, shrinking the workforce and forcing numbers to look better than they were.

Raymond J. Keating, the chief economist for the Small Business & Entrepreneurship Council,tells the San Antonio Business Journal that the latest numbers are “far below expectations and where job creation should be — at 240,000 to 250,000 — during a recovery,”