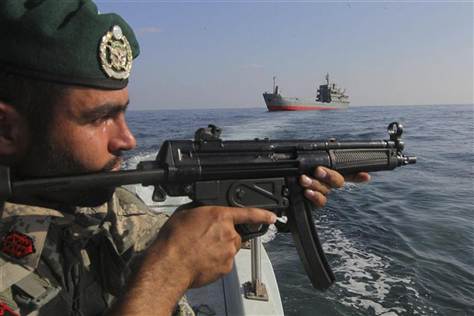 An Iranian warplane has spotted a US aircraft carrier during Tehran’s ongoing navy drill in the Persian Gulf, reports IRNA news agency. The US fleet’s maneuvers come after Iran threatened to block the oil flow through the Strait of Hormuz

Tehran’s surveillance jet has shot a video and pictures of the American carrier, which was later identified as John C. Stennis. The US Fifth Fleet keeps a military base in Bahrain, while the ship was spotted in the Gulf of Oman after crossing the Strait of Hormuz.

“An Iranian vessel and surveillance plane have tracked, filmed and photographed a US aircraft carrier as it was entering the Gulf of Oman from the Persian Gulf,” said Adm. Habibollah Sayyari, Iran’s navy chief, as cited by the official IRNA.

“The foreign fleet will be warned by Iranian forces if it enters the area of the drill,” added Sayyari.