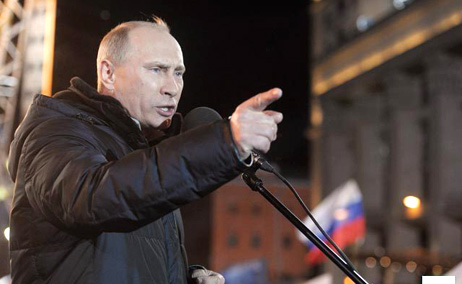 Vladimir Putin, set to win a third presidential term, declared his victory and thanked his voters for their support. Polling at almost 64 percent with almost all of the votes counted, victory seems assured.

“We have won in an open and fair struggle,” Putin said, addressing 110,000 people gathered on Manezhnaya Square outside the Kremlin walls.

He stressed that this victory signals a defeat for those who want to destroy Russia.

“This was more than just a presidential election. This was a very important test for us – a test for the political maturity of our people and independence. We have demonstrated that nobody can impose anything on us. We have shown that our people are capable of telling the difference between the desire for novelty and progress, and political provocations that press for only one goal: to destroy Russia. Today our people have proven that such scenarios are not going to work in our country,” Putin said.

“We will work honestly and intensely, and we will achieve success. We encourage you all to unite for the benefit of our or nation and our homeland.”

Putin, who is likely to win the election with nearly 64 per cent of the vote, appeared on stage with outgoing President Dmitry Medvedev, who also thanked all of Putin’s supporters.

“Thank you all for supporting our candidate. We all needed this victory – our country needed it. Each one of us needs this victory. We will not give it away to anybody,” Medvedev said.

In 2008, when Medvedev won the presidential race, they also appeared together to give speeches.

Speaking at the rally, Putin appeared to have tears in his eyes. This sparked an online frenzy, with many bloggers crestfallen with what was perceived as an emotional reaction, while others were quick to call them “crocodile tears.” Putin later said the cold wind had made his eyes water.

“It was windy, windy it was,” he told journalists, arriving at his headquarters.

At the headquarters, Putin made several video calls to congratulate his supporters across the country and assure them that his election promises will not be broken.