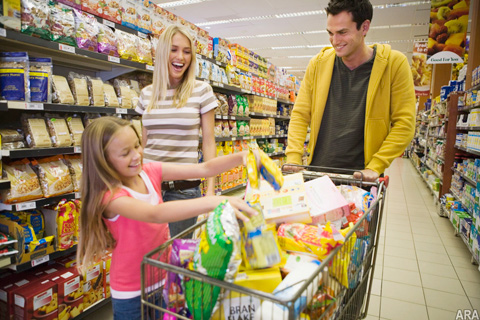 (ARA) – Last year’s high grocery prices had many Americans looking for ways to save at the supermarket. The upswing in prices over the past 12 months may have you wondering what will happen this year at your local grocery store.

“We will continue to see higher prices, but we will also see all the different ways Americans love their food – in supermarkets, on television, at restaurants and now even on their mobile phones,” Lempert says. “We are on the verge of what may be one of the most exciting and game-changing years in the food world.”

Lempert advises consumers to watch for 10 major trends in their supermarkets this year:

1. Higher food prices – Last year’s trend will continue, so consumers will place even more emphasis on ways to save money. In addition to already-popular methods like coupons and frequent shopper cards, you may want to consider using your mobile device to menu plan while you shop. Websites like ConAgra’s ReadySetEat.com give you recipe ideas and can also help you find out which ingredients are on sale in your store.

2. The group experience will grow – Food blogs set a foundation for group experiences, food trucks tweet their locations, and flash food raves assemble underground at midnight. More Americans are choosing to eat and shop together in new ways. Mobile app marketers will offer “social rewards” for groups that shop together – think of it as the virtual version of warehouse clubs.

3. The baby boomer influence will grow – Last year, the first of the 76 million-strong boomer generation turned 65. Their influence on the supermarket will show up this year in increased healthful food options, wider aisles and lower shelves.

4. Increased emphasis on “farm to fork” – More Americans are interested in knowing where the food comes from. In 2012, you’ll see more blogs and social media featuring farmers, as well as advertising and TV programs starring farmers as food experts. Hunt’s tomatoes, for example, are grown in Oakdale, California and harvested at the peak of ripeness then flash-steamed to maintain the natural tomato goodness.

5. The end of the checkout lane – Tech-savvy options are gaining popularity, with consumers enjoying self-checkouts, comparing prices at nearby retailers, and taking advantage of the convenience of cellphone scanners, in-store interactive media devices, QR codes, RFID and mobile coupons.

6. Ethnic on the road – Food trucks are replacing gourmet and specialty stores as the channel to experiment and discover new food experiences – especially when it comes to ethnic foods. More often than not, these ethnic food trucks are operated by natives of the countries from which the actual cuisines being offered originated, and they have the ability and knowledge to share the heritage and romance of the food.

7. It’s a man’s (grocery shopping) world – Dads aren’t just winning the bread; these days, they’re also bringing it home from the grocery store. A Bureau of Labor Statistics study found that 41 percent of men are now preparing food for their families, as compared to half that percentage in 2003. Look for them to do more grocery shopping, too, Lempert predicts.

8. Extreme home cooking – More people will continue to eat at home to save money. Following the lead of extreme couponers, groups of everyday cooks pride themselves on making the most food for the least amount of money.

9. How sweet it isn’t – Reduced sugar products and revised Nutrition Facts panels will be the biggest health claim in 2012. With the negative health effects of sugar and high fructose corn syrup gaining so much attention, look for a continued emphasis on reducing sugar in our diets. Food producers like ConAgra are responding by eliminating high fructose corn syrup from such staples as Peter Pan peanut butter and Hunt’s Ketchup products.

10. Listen to your food – You judge the readiness of some foods (like microwave popcorn or grilled burgers), by the sounds they make. Multisensory perception will be one of the new “food sciences” in 2012, as psychologists and food scientists join forces to design, create and influence the sounds of our foods to convey freshness, taste and even health attributes.

For more information about Phil Lempert’s 2012 predictions, visit SupermarketGuru.com, and for simple meal ideas made in 30 minutes or less, visit ReadySetEat.com.