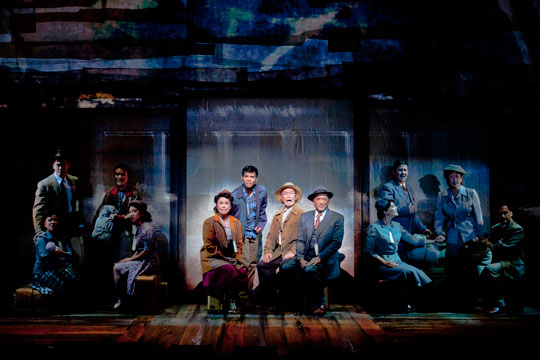 With stories of every stripe and subject being produced for the musical stage these days, one shouldn’t have to ask “How can they make a musical out of the injustice of interning native-born American citizens into forced relocation camps during WW II?”  Fair question.  The answer is: before you complain or dismiss the effort, go see this powerful and cathartic musical, which is beautifully staged, with triple-threat actors, who sing, who dance, and who also touch the heart.

“Allegiance” is a new American musical inspired by the true-life family experience of actor George Takei (Mr. Sulu of “Star Trek” fame).  Takei, along with his parents and other family members were removed from their Salinas farm in 1942 and were placed in a government internment camp in Heart Mountain, Wyoming.

Following the 1941 Japanese attack on Pearl Harbor, fear and paranoia of all varieties were rampant in the country.  Many American-born and naturalized citizens of Asian decent, and those of Japanese ancestry in particular, from Seattle to San Diego, came under suspicion as people who might give aid and comfort to the enemy.  The government’s remedy to the situation was to remove more than 120,000 citizens from their homes and businesses and place them in “protective custody for their safety” – but far away from the West Coast – in relocation camps ranging all over the country.   Granted it was a traumatic time for the country, but never the less, it was still a shameful act.  And its impact is still being felt by some today.

Set against this historical tableau, Takei, in collaboration with Jay Kuo, who wrote the music and lyrics, and Marc Acito, Jay Juo, and Lorenzo Thione, who wrote the libretto, have fashioned a compelling and poignant story and how it effects an American family before, during and after the war.

“Allegiance”, deftly directed by Canadian Stafford Arima, is somewhat of a memory piece, and as such, is softer and less strident in tone around the edges of its core story than earlier plays that have used racial profiling and social injustice as themes.  Arima is involved, not only as its director he brings a personal and emotional perspective to the production.  Arima’s father, two aunts and an uncle also were interned, but in British Columbia, Canada during WW II.

The story revolves around the Kimura family of Salinas, California.  Life in the San Joaquin Valley of California in 1941 was no different for the Kimura family on their small artichoke farm than for those of their friend’s with small farms, than for any other group of hard-working Californians.  Then, on December 7th everyone’s world changed. “Allegiance”, is an American story of country, of family, and of culture set to music, ranging from stirring to reflective and illuminates how those changes affected a great many people in war-time America.

What is gratifying for me at least, is to see actors of Asian descent filling 80% of the roles as called for in the script; with Anglo’s filling only Anglo roles.  The cast may not all be Japanese-Americans – Lea Salonga of “Miss Saigon” fame, is Filipino, but is of Asian descent, and her beautiful soprano voice hasn’t diminished a wit in the twenty years since winning her Tony as Kim, in “Miss Saigon”.  All of the principal actors, at some point in the production are required to speak Japanese (Tim Dang, artistic director of East West Players of Los Angeles, take note and check out this show).

As one of the three central characters in the musical: Salonga as Kei Kimura, Telly Leung as young Sammy, and George Takei as Ojii-san and as the older Sammy, do most of the heavy dramatic lifting, and sing with energy and passion.  Even Septuagenarian Takei can carry a tune and sell a song and also understands how to inject humor into a somewhat somber script.  Also, there is strong support from Michael K. Lee as Frankie, a camp resister and activist, who falls in love with Kei, to Allie Trimm as Hannah Campbell, an early love interest for young Sammy, and Paul Nakauchi, as the stoic and principled family patriarch Tatsuo Kimura, and Paolo Montalban as the Japanese American activist Mike Masaoka, promoter of the famous and heroic Japanese American fighting unit known as the “442 Battalion”, and Washington D.C.’s link to the Japanese American community.

The Old Globe has few equals when it comes to using its state-of-the-art technical arsenal to enrich a production.  Director Arima has enlisted a clever creative team to maximize the input and impact of his team led by Donyale Werle as Scenic Designer, Howell Binkley, Lighting Designer, Jonathan Deans Sound Designer, and just the right amount of projection designs by Darrel Maloney.

“Allegiance” performs on the Donald and Darlene Shiley stage through October 21, 2012.