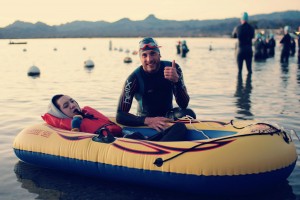 What: Roughly 1200 athletes will participate in the return of HITS Triathlon Series to Palm Springs, CA this weekend. Designed for seasoned triathletes as well as first-timers, the HITS Triathlon Series features five distances over a single weekend offering A distance for everyone!™ and will celebrate its one year anniversary in sunny California.
Story Ideas: James Lawrence, 35, of Lindon, Utah is using Palm Springs as the last stop on his 2012 world record attempt. He completed two full distance triathlons each month this year and hopes to raise $5 million for the Quiet Way Foundation (quietway.org) through his “Tri and Give a Dam” campaign (triandgiveadam.com). The Quiet Way Foundation is a nonprofit organization that helps to provide fresh water to people in Kenya by building dams.

Deborah Battaglia, 44, of Salt Lake City, Utah set a goal to do the entire 2012 HITS Triathlon Series at the Full distance, which includes 10 races across the country. She already boasts ten first female overall titles. Both as a warm-up to the Full distance and as a way to motivate new triathletes, Battaglia also races in the Open race at each venue.
Paul Amey, 39, of La Jolla, California is a celebrated professional triathlete who races for Great Britain and will be competing in the Half and Olympic distance races. He was involved in sports from an early age and gave away 2 full-time running scholarships at American Universities to pursue triathlons. In 2004, he qualified for the British Triathlon Olympic Team. Since 2008, Paul has been competing in the Ironman and Ironman 70.3 events with a personal and British Ironman record of 8hrs:01mins.
Susan Haag, 46, of Jacksonville, Florida has raced at all the HITS Triathlon Series races since last December. She has completed all the HITS Full distance races, is an Ironman, marathon runner and notorious class clown. She also competes in the HITS Open races at each venue.

Matthew Smith, 35, of Indio, California says that triathlon has become an integral part of his daily sobriety. He started participating in June of this year and will be racing the Half distance race this weekend. Smith has been sober since 2009 and has his love of running and now triathlon to thank for it.

Eric Oscarson, 36, of Provo, Utah used to weigh 365 pounds and has recently lost 175 pounds due to the sport of triathlon. He did his first in 2009 after setting a goal to one day compete in a Full. He finished his second full distance race this Fall.

More information:
Course maps and additional information about the HITS Championship is available at http://www.hitstriathlonseries.com/palm-springs-ca-2012/.

Additional information about HITS Triathlon Series in general is available at www.HitsTriathlonSeries.com.