Desert Local News Desert Local News is your local news, entertainment, theater, film, and online fashion magazine. We provide you with the latest breaking news straight from the entertainment industry.
Home News Community 62Nd Annual Grubstake Days In Yucca Valley Has Something For Everyone! 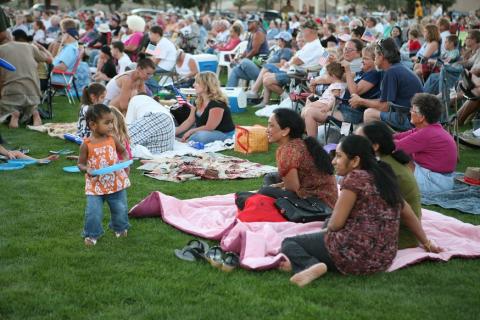 From country to pop-punk, the entertainment stage at the Grubstakes Community Fair on Saturday, May 26th, will have a little bit of something for everyone.

Immediately after the parade which starts down Twentynine palms highway at 10:00am, the Z107.7 Mobile DJ will take the stage and play adult contemporary hits. The Z107.7 Mobile DJ is a service that “brings the party to you.” Playing all genres of music, they offer both large and small state-of-the art sound systems and professional radio DJ’s for weddings, school dances, private parties, and other special events.

Following the Z107.7 Mobile DJ will be Mosey Bravo, an all-original pop rock trio that transcends rock genres with catchy tunes and a big vocal and guitar sound that easily connects with audiences. The music melds British pop, American soul and folk music with reggae and hard rock rhythms. Mosey Bravo is led by vocalist, composer and guitarist Michael Callan, who is responsible for crafting the band’s style and sound. His probing lyrics address the social and political forces of our time. Callan has played with George Harrison and performed in Chuck Berry’s band. He also performs as a solo artist and acoustic fingerpick guitar soloist. The group includes Daniel Boening on electric bass and Efrain Diaz on percussion.

Kayla’s Little Dance Academy is a brand new dance program that just started at the Joshua Tree community center. The Academy offers classes in hip-hop, ballet, jazz, cheer, lyrical, and Polynesian. KLDA’s goal is to provide a fun, non-competitive environment for kids to dance and express themselves.

The first headliner is local favorite Kristina Quigley. Quigley cannot remember a time when she wasn’t a singer. She was raised in a trucking family, and from a young age she would travel with them all over the country singing for people at truck stops with her karaoke machine.Beginning at age 15, Quigley sang at Pappy and Harriet’s Pioneertown Palace every weekend, where her grandmother, Harriet, helped her hone her skills as a professional singer. In the summers, based out of Oregon, Kristina traveled around the U.S. singing at county fairs, rodeos, coffee houses, and private parties. During those traveling years, she recorded with the band Cracker on their album Kerosene Hat.Of the numerous singing contests Quigley has entered, she has never lost one. When she was 19, she entered an international singing contest in Branson, Missouri, that went on for 11 months, and won.Quigley has been in many major concerts, sharing the stage with country greats: Meryl Haggard, Don Williams, Barbara Mandrell, Bill Monroe, Paulette Carlson + Hwy 101, Charlie Daniels, and the Osmonds.

Rob Watkins (pastor of Calvary Baptist Church in Yucca Valley) is an award-winning ventriloquist and illusionist. He was most recently voted Audience Favorite at the McCallum Theater Open Call 2011, as well as the grand prize winner. His shows are a blend of mayhem and mystery with clean comedy suitable for the whole family. He has performed at a number of comedy venues, including the Improv on Melrose in Hollywood and is a regular performer at the Hollywood Magic Castle.

Joel Daniels recently left the United States Marine Corps where he played in the Twentynine Palms Marine Base Band. In a fun and eclectic half hour, he will be playing bagpipes to rock music. Daniels recently led the Survivors’ Lap for the Relay For Life.

The second headliner of the day is the pop-punk band, Forever Came Calling, with a wide following from Twentynine Palms. This will be their last local performance before they leave on an extended tour. The band was the focus of a 2010 documentary about “No Room for Rock Stars: the Vans Warped Tour” that was shown at the Sundance Film Festival and in Los Angeles. Last year the band signed a contract with Pure Noise Records and has been confirmed to play Vans Warped Tour in 2013. The current lineup of Forever Came Calling includes John Swaba on bass, Bryce Esquivel on drums, Joe Candelaria on guitar and vocals and Ron Grieger on guitar.