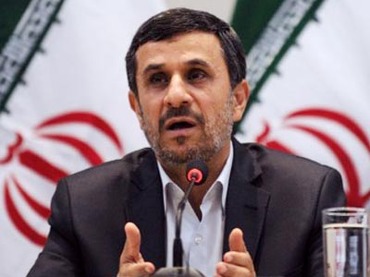 Iranian President Mahmoud Ahmadinejad’s eighth address to the UN General Assembly was defined mostly by its absences: The Syrian conflict and an infamous anti-Muslim film weren’t mentioned, and the US delegation wasn’t present in the chamber.

President Mahmoud Ahmadinejad called for world leaders to serve their people, not rule over them during his speech before the UN General Assembly on Wednesday.

In a surprise turn, Ahmadinejad’s speech took on an almost poetic bent evoking “the spring of humanity and the greenery of all ages.”

Peace and love were not the only items on the agenda, as Ahmadinejad enumerated a litany of injustices that had occurred throughout history despite the striving of “righteous people and justice seekers.”

Several barbs were specifically directed towards the West.

Ahmadinejad decried the “current abysmal situation of the world,” saying it resulted from“the self-proclaimed centers of power who have entrusted themselves to the Devil.”

He further lambasted the“arms race” and “nuclear intimidation” being perpetuated by“hegemonic powers,” as well as “the continued threat by uncivilized Zionists to resort to military action.”