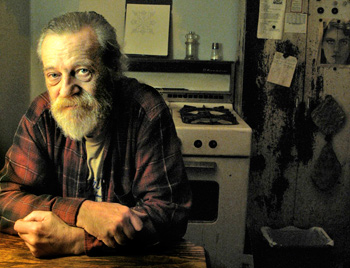 Palm Springs, CA –  The World of Z documents the powerful four year journey of three filmmakers into the life of manic-depressive artist Zbignew Daniel Fiks –  known as “Z.” Now sixty years old, “Z” looks much older.  He is engaging, intelligent, and an outstanding conversationalist, despite his rough exterior, and despite having spent much of his life suffering from bipolar disease. Through their own footage, interwoven with Z’s personal home videos, films and audiotapes, filmmakers Brad Besser, Vince Clemente and Daniel Billups capture the high points of “Z’s” once happy family, as well as its slow destruction, the aftermath of his divorce, his loneliness, insanity and depression. “As filmmakers we did not want to make a broad statement about the effects of bipolar disorder as an illness, instead, we decided to use the film as a magnifying glass to this specific case.” said filmmaker Brad Besser. “It was important to let Z’s life present itself organically.”

Don’t miss The World of Z  – one of the many thought-provoking screen gems you’ll see at this year’s inaugural American Documentary Film Festival. For more information, and a complete schedule listing, visit http://americandocumentaryfilmfestival.com/