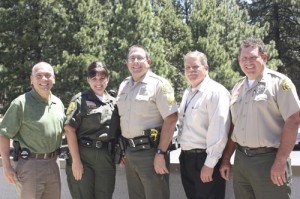 On Monday, February 13, 2012, Deputies from the Big Bear Station located the stolen 2008 Subaru Impreza parked at a residence in 39000 block of Willow Landing in Big Bear Lake.

Detectives from the Twin Peaks Station responded to assist  and contacted Johnson at the residence.  Johnson was arrested without incident, transported and booked into the Central Detention Center on an arrest warrant.  She is currently being held on $500,000 bail.
________________________

On Friday, February 10, 2012, at about 12:00 noon, Deputies from the Twin Peaks Station responded to the area of Hook creek  Road and Hwy 173 following the report of a stabbing.

The victim was stabbed a total of 5 times and was flown by helicopter to Loma Linda University Medical Center, where he was treated for his injuries. An area check was conducted by reponding Deputies, Sheriff’s Aviation and the California Highway Patrol, but neither the suspect nor the vehicle were located.  The suspect was identified by the victim and witnesses, and is currently still outstanding.