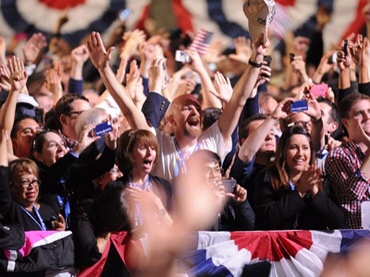 Barack Obama is projected to be elected to a second term as President of the United States after taking a crucial swing state Ohio.

“We're all in this together. That's how we campaigned, and that's who we are. Thank you,” the president wrote on Twitter shortly after the projection was reported.

Ohio is a bellwether state in US presidential elections. No Republican candidate has made it to the White House without winning this state. For the last 12 elections, this swing state went to the winner of the national race.

The Democrat also was declared the winner in other swing states including New Hampshire, Wisconsin, Colorado and Iowa.

In addition to securing America’s highest office, Democrats are also slated to retain control of the Senate. They won three seats in the upper legislative chamber, and are expected to hold 53 out of the 100 total – a majority of the chamber.

The House will remain under Republican control. The GOP won 169 seats there, compared to the Democrats’ 114, with 152 still up for grabs. The current composition of the legislative body is split 193 to 242 between blue and red, respectively.

The economy and, more specifically, unemployment were at the heart of the 2012 presidential race. The Romney camp threw out the perennial “are you better off than you were four years ago?” litmus test established by Ronald Reagan against Jimmy Carter in 1980, to which the electorate voted “yes”.

Obama argued there had been 32 straight months of job growth under his tenure, with 5.4 million new jobs being added during that time. He also lowered taxes on middle-class families making $50,000 a year. He claimed his bailout of the US automotive industry saved 1 million jobs, an argument that likely had considerable sway over autoworkers in battleground states like Ohio and Michigan.

He also pledged that his national healthcare plan would keep people with preexisting conditions from being denied coverage. He also claims “Obamacare” will cut the deficit by over a trillion dollars over the next two decades and reduce healthcare costs in America.

Obama was carried a sizable six to eight point lead over Romney among women in the run-up to Election Day, likely because of his stance that a woman’s healthcare choices were between her and her doctor. He also supported women’s fight against pay discrimination in the workplace, by signing the Lilly Ledbetter Fair Pay Act of 2009.

He was viewed to be strong on national defense, bringing an end to the Iraq War, setting a 2014 troop withdrawal deadline for Afghanistan, and bringing Osama Bin Laden “to justice.”