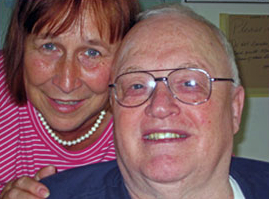 Providing three square meals a days and receiving help with getting dressed in a nursing home should really be no longer acceptable.

This is the traditional way. Recently I received a call from the social worker where my husband resides in a dementia unit at a nursing facility. She wanted to know if I just wanted him kept comfortable and hydrated since he was unresponsive, or did I want him sent to the hospital. Naturally I jumped from my chair and said: “He just had the beginning of a head cold. What is going on? You really do not have enough staff for one-on-one care which is what he needs. I will do it and I am coming over now”. I felt my husband was home again and I had to suddenly provide the 24-hour caregiving I used to provide him when he was at home.

With my bags still intact from two days before having just visited with him for Christmas, it did not take me long to get in the car to drive the 300+ miles from home to the nursing center where he is in Maine. Normally it takes me 5 hours to get there and another 5 hours to return home. This time it took me 3.5 hours to get there as I was able to speed and did not stop for any

He had stopped walking on his own in the spring of 2010. After 10 years of providing his family care-giving, almost all by myself except for the last year, I could no longer continue to lift on him, support him physically, without getting sick myself. This is a common outcome of family caregivers who cannot see the forest for the trees and find themselves sick, even dying before the individual with Alzheimer’s.

Determined to be here for him to the end, I had to make the difficult decision to let him go into long-term care on May 18, 2010.

The head cold this year often leads to pneumonia. In individuals with Alzheimer’s who are not mobile, this is extremely dangerous. My husband was treated in November for a UTI. The attending physician usually treats him twice in a row as his UTI is quite well established and difficult to treat. UTI is a common condition in long-term residents. For whatever reason this time the doctor did not treat him twice and so he was still infected. The head cold did result in the beginning of pneumonia for him. This was all discovered on the second day I was there when he was taken to the emergency room with a temperature of 102+.

At the nursing facility the professional caregivers provided the traditional care: changing him and feeding him his meals (although I fed him since I was there and willing to do whatever was necessary to provide him some comfort). Although it is well known and recognized that drinking plenty of fluids help flush the urinary system, the staff at the nursing facility was not able to provide the extra time to do that. This was left to me and I was grateful to have been able to rush to his side to keep him alive.

At times I felt I was in the way and witnessing events that regularly go on in this long-term facility. At times I was grateful to witness the 1-2% of professional caregivers that give their all, put up with all the frustrations of under staffing, stay beyond their shift, and even called in to enquire about an update on my husband. Without my active participation as the family caregiver, my husband would not be here with me today. He may not have a lot of time left as he is in the late stages of Alzheimer’s, but every minute counts for us. You might say that we are a very tight couple.

Moral of this experience: Seize every opportunity, every moment. If you have someone in a long-term facility and they become ill, rush to their side and stay with them around the clock to provide any type of caregiving you can. If they are not ill but simply residing there for any reason, visit and call often to enquire about their well-being.

Target one individual, in my case it is the social worker, as a primary contact. Hold that person responsible and accountable for what is going on there, or not going on. By your caring actions it will be clear that your loved one is not just another person occupying a bed in their facility. Furthermore you are asking the facility to go beyond the traditional services of feeding and dressing. Now you are ready to partner with the facility instead of just being a customer.

Tom Krause said “There are no failures – just experiences and your reactions to them”.

About the author: Ethelle G. Lord