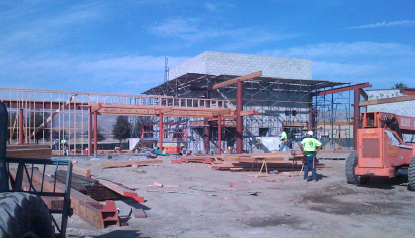 Community Health & Wellness Center
• Masonry work is completed until construction begins on revised portion of project.
• Steel structure and roof decking is installed in pool equipment area.
• Framing has begun and trusses have been loaded at the Teen Center.
• Framing and rough electrical has begun at the kitchen area.
• Roof deck installed at Activity Center and Equipment storage.
• Trusses installed at Locker/Shower Facility.
• Electrical wiring is being pulled in the Activity Center and Teen Center area.
• Drywells for pool maintenance system are installed.
• Vertical steel components completed.
• Aquatic Center pad prepared for pool excavation
• Construction progress is shown in the photos below:

Economic Development Department
Engineering
• Verbena Basin – Met with representatives from the Riverside County Flood Control and Water Conservation District (RCFC&WCD) to discuss alternatives to the Verbena Basin project, which has been delayed due to ownership transition of the Two Bunch Palms property. RCFC&WCD will study the impact of the Tuscan Hills water detention basins and whether the Verbena basin could be constructed on the property they currently own in the vicinity of Verbena Drive and Two Bunch Palms Trail. Staff is assisting in providing information the City has regarding the Tuscan Basin and hydrology.

• Camino Campanero & Palm Dr. Traffic Signal – Signal is operational and staff has
reset signal from flashing red to normal operation twice this week. These are probably due to power interruptions to the controller. The contractor has been notified and will be reviewing error codes stored in controller to address the problem.
• Western Ave. & Scenic Dr. – Hazardous Waste Initial Assessment Study is being
reviewed by Caltrans and is scheduled to be completed on January 9, 2012. Plans
have been completed and the specifications are in process to call for bids as soon
as approval is received from Caltrans.
• Village at Mission Lakes – Grading is being inspected and final plans for the road
improvements and striping of the widened roadway section on Little Morongo and
Mission Lakes Blvd. are being reviewed. Some improvements will be in the
Riverside County portion of the intersection and will be reviewed by them prior to the
City’s approval as the lead agency.
• Safe Route 2 Schools Federal Cycle 3 – Request for Proposals (RFP) for design
has been prepared. Awaiting Southern California Association of Governments
(SCAG) approval of funding scheduled for early January before the RFP is released
for advertisement.
• Christ Lutheran Church Project – The church is on south side of Pierson
Boulevard in County area. Street improvements will be on the north side also for a
transition. Staff met with contractor to discuss City requirements.
• Subdivision Bond Estimates – Provided cost information to the City Attorney’s
Office on the improvements to be completed/removed and replaced for the Eagle
Point and Hidden Springs subdivisions.
• Vista Del Monte – Investigated grading bond that was submitted for two (2)
residential phases that were never approved for recordation. A new bond will be
required for any new requests by the developer. Since no grading has started, the
City Attorneys Office will review the bonds efficacy.
• 8th Street Improvements – Contractor has sent notices to property owners of
pending construction and is potholing utilities for exact location and depth.
Pulverizing existing pavement is scheduled to begin on January 3, 2012.
• Street Striping – Took place during school holiday break.
Public Works – Operations & Maintenance
• Inspected NSP Homes.
• Removed broken tree branches at Tedesco Park and Veterans Park.
• Fertilized all City parks and facilities.
• Installed two (2) City Limit signs & contacted Dig Alert regarding installation of
additional signs.
• Repaired signs along Palm Drive, south to the freeway.
• Filled potholes along Mesquite, Mt. View and Two Bunch Palms.
• Repaired irrigation system at Rancho Del Oro.
• Repaired plumbing at Mission Springs Park and Wardman Park.
• Repaired plumbing at Skyborne Fire Station No. 37.
• Completed work orders for City Hall.
• Boarded up vandalized windows at the former Temple.
• Cleared main drains for Wardman Park restrooms.
• Repaired water heater at Skyborne Fire Station.
• Assisted Police Dept. with re-booting of City cameras.
• Replaced “Ped Crosswalk” and “Signal Ahead” signs (high wind).
• Cleaned up intersection of Two Bunch Palms and Santa Isabelle.
• Repair water main & Tedesco Park
• Repaired Visitor Center entry door.
• Repaired AC/Heater at City Hall Bldg B.
• Removed weeds and debris from Indian Ave. Storm Channel.