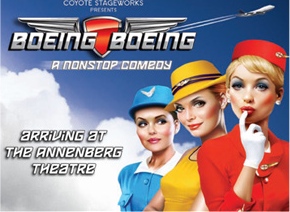 Palm Springs, CA – Fresh from their big wins at the Desert Theatre League’s 2010-2011 Desert Star Awards (Five Awards for A TUNA CHRISTMAS), and their highly successful run of the hit musical PLAID TIDINGS in November, Coyote StageWorks returns to the Annenberg Theater this coming February with the Tony Award-Winning comedy BOEING-BOEING.  Kick off Modernism Week with this high-flying, 1960’s romp.

With a plot that’s as fast-paced as a busy airport, BOEING-BOEING delivers jet-propelled laughs in a sexy, retro romp. Just imagine: The year is 1964. Professional playboy, Bernard, is engaged to not one, but three gorgeous airline stewardesses; one American (TWA), one Italian (Alitalia) and one German (Lufthansa.)  Aided by his long-suffering housekeeper, Berthe, and a copy of the airline’s flight schedules, Bernard juggles his romantic arrivals and departures with fine-tuned precision, much to the awe and envy of his devastatingly shy, old friend Robert.  All this is about to change, though, and Bernard’s love life is about to hit comic turbulence when all three of his fiancées are rescheduled to the newer, faster Boeing jets and they all arrive at his apartment at the same time!  BOEING-BOEING arrives at the Annenberg Theater on February 16th. But grab your boarding passes quick! There are only five special performances and the lay-over only lasts through February 19th.