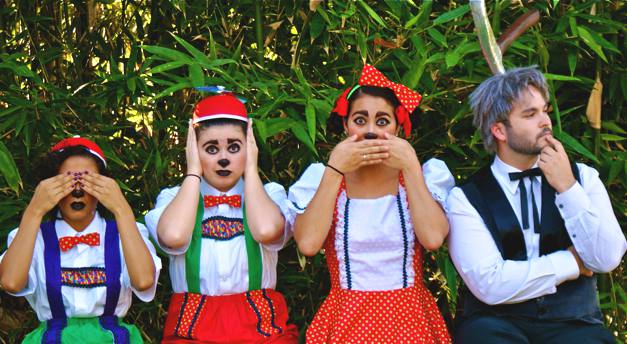 Playwright David Ives’ insightful offbeat comedy play is in good hands with College of the Desert (COD) Theatre Department Assistant Professor and production honcho, Russell “Tres” Dean.  Friday night Dean and his cast of highly talented and entertaining performers served up a tasty dish of comedy, creative satire, and a first rate production of “All in the Timing”. The show does justice to Ives’ quirky view of life and to those who are driven in their pursuit for relationships and connections.

According to the program notes, Dean is huge fan of playwright Ives, and with good reason.   Both are creative thinkers who “work outside the box”.  I still fondly remember seeing productions at the Palm Canyon Theatre entitled “The Big Show”, created and directed by an indefatigable, brilliant young Improv director named Tres Dean.  What most of his fellow performers in the Valley used to say about him was “… is there any way we can bottle his energy and gifts and drink freely from it from time to time?” Thankfully, all that talent, energy and creativity is now channeled toward producing interesting and challenging shows on the stages of the College of the Desert.  The school and the theatre arts students, and their audiences are fortunate and are definitely in for a treat.

“All in the Timing”, is blessed with a cast of eighteen high-energy performers who are both fearless and talented.  It’s a delightful show to begin COD’s 2012/2013 Season.

When a show has an outstanding ensemble, like this show, it’s always tough on the critic who then has to mention or highlight a certain performance or performances in the review (but who really cares about the critics anyway?). In any production there are always a few who stand out.  That doesn’t mean the rest of the cast didn’t stand out.  It just means critics have publishers with space limitations.

With that being said, Chris Hoggatt and Paulette Bartlett who portray Buster Keaton and Charlie Chaplin respectively, are scene shifters who set the tone of what is to follow with flair, energy, and style.  Miss Bartlett, doesn’t utter a word on stage, but is an important actor in the show. Hoggatt, an actor whom I suspect, can tap-dance up a storm when the opportunity arises, brings an earnest freshness as Jack in his scenes with Natasha Garcia, as Jill.

Jennifer Kiehl as Mrs. Trotsky, and as Ruth, has turned into a solid actor over the last three years and shines in this production.  Ivan Ortega in his scenes with Miss Kiehl, also scores.  Shawn Abramowitz as Leon Trotsky, wears that pick axe sticking out of his head (thanks to Technical Director and props wizard, Diamond Braverman) with real flair.

Matthew Reyes as Al, does a nice turn in his scene “The Philadelphia”, as does Liridona Leti as Betty, in hers.  Anthony Gomez and Hannah Seals deliver nice performances in the “Universal Language” skit.

There are many clever directorial touches in this production. Creatively executed set changes and overall traffic management, being just two.  If I had an issue with this production it would only be that it runs a tad too long.  Perhaps, the six short pieces and the two set pieces – “Ancient History, Parts One and Two” – could be juxtaposed or juggle in a way where the entire show runs two hours.  But then, I’m nitpicking.  It’s a very entertaining evening of theatre regardless of length.

“All in the Timing” performs at Theatre Too, on the campus of College of the Desert through October 28th.  Call 760-773-2565 for reservations and tickets.