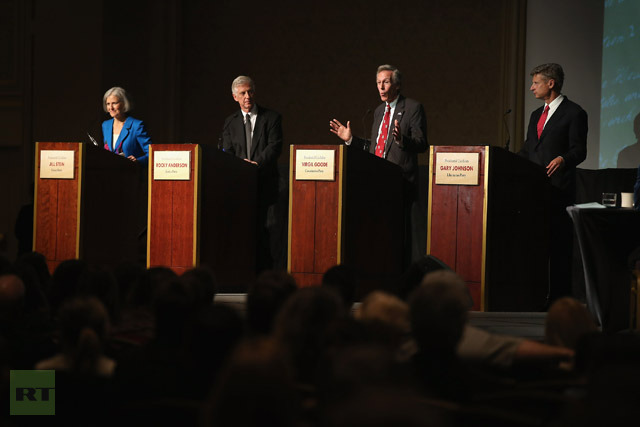 In response to a blackout from the mainstream media and the American political elite, RT is happy be giving American voters coverage of this year’s third-party presidential debate, hosted by Larry King and a panel including our own Thom Hartmann.

On Tuesday night, RT was one of only a handful of media outlets to broadcast the debate moderated by multi-award winning broadcast journalist Larry King. Organized by the Free and Equal Elections Foundation, candidates from the Constitution, Green, Justice and Libertarian parties sounded off on the issues facing American voters – without having to worry about towing Democratic or Republican party lines.

The third-party candidates’ debate statements, as diverse as they were, came as a breath of fresh air to the growing portion of Americans who see little substantive difference between Mitt Romney and Barack Obama. And as much as they disagreed, there was near unanimity on one general concept: that the Democratic and Republican parties represent corporate interests, not the average American.

Speaking to RT, Free and Equal Elections Foundation founder Christina Tobin said,“We’re going to shift the power back to the people, back to the origins of the Constitution, which doesn’t even mention parties or corporations.”

And despite having their platforms largely silenced by the two-party system’s ruling elites, Libertarian Party candidate Gary Johnson, Green Party candidate Jill Stein, Constitution Party candidate Virgil Goode and Justice Party candidate Rocky Anderson plan to continue their campaigns through Election Day. Since their thoughts on critical issues have been muted by the mainstream media, however, their visions for America have been left without an outlet.

The debate changed that.