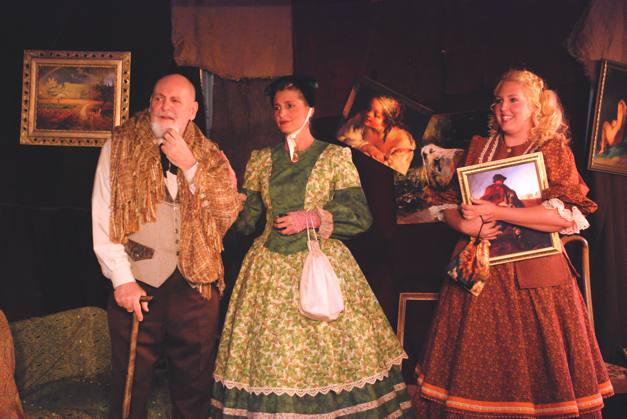 One of the enduring qualities about the stories of America’s favorite satirist, Mark Twain, is their unfailing sense of humor, sprinkled with just the right amount of cynicism.  His general message to his public has always been don’t take yourself too seriously.  Politicians were among his favorite targets over the years.  Unfortunately for us, not taking oneself seriously is something that most politicians have never learned to do.

The Palm Desert Stage Company kicks off its third season in the Joslyn Center’s Arthur Newman Theatre with Twain’s revived comedy/farce “Is He Dead”, adapted by Chicago-born and New York City-based author/playwright David Ives.  The comedy is  stylishly and briskly directed, by the valley’s reigning comedy/farce director Tres Dean. (Dean directed another Ives’ play, “All in the Timing” at College of the Desert, just last month).

The story or romp is set in Paris in 1846, and features a cast of stereotypical bohemian comedy/farce characters who mug and wink their way through the silly but witty and satirical Twain dialogue that’s been judiciously adapted by Ives.

Jean Francois Millet (Steve Lyon),  a lantern-jawed, brilliant, but unrecognized painter, is talked into a wacky scheme of staging his own demise as a way of increasing the value of his large cache of unsold paintings, by a trio of his bohemian friends: Dutchy (Peter Nicholson), Chicago (Charles William Gaines), and O’Shaughnessy (the always energetic Lou Galvan).  Jean-Francois initially refuses to go along, but a series of bill collectors knocking at his door and at that of his friend Papa LaRoux (Peter Mins), the father of Marie (Jennifer Bennet) his intended, forces him to reconsider the plan.

All must deal with the odious Bastien Andre (a deliciously lascivious and persistent Garnett Smith) who, not only is the owner of the outstanding bills, he also holds the trump cards of money as well.  And he has his eye on Marie.  As the plot thickens (into a mishmash of farce clichés), Jean-Francois is ultimately convinced that the plan might work.  Thus he disappears from life and re-surfaces as his imaginary twin sister, a widow both mad and madcap.  Shades of Brendan Thomas’ turn of the 20th century hit “Charley’s Aunt”.  Once Millet/Lyon trades his painter’ smock for a pink dress and a wig all bets are off and the zany story spins this way and then that way.

There isn’t a weak link in this company of players, and they are the reason that makes this production so enjoyable.  “Farce appreciation”, however, isn’t one of the American theatre-going public’s favorite formats; and that’s a pity.  When farce is done properly; with energy, gusto, and flair, as in this production, the effect is just as satisfying as in any manic comedy production, only more so.  “Is He Dead” brings to mind the comedy farces of  master playwright Alan Ayckborn, (often referred to as the Neil Simon of the English theatre, or is it vice-versa?) and his plays “The Norman Conquests” and “Bedroom Farce”, to name just two of more than 50 of his plays.   In my humble opinion, English playwright Michael Frayn, penned one of the funniest plays ever, in his comedy/farce “Noises Off”, a story about the theatre and what goes on backstage during a production.

With ensemble work it’s often difficult to single out individual performers, because the splendid company is what makes this production zing and entertain.  With that being said, it would be hard not to recognize the efforts of Steve Lyon in the duel roles of Jean Francois Millet and that of Daisy Tillou, his “twin sister”.  His constant transitions between the two characters, is a work of energy-charged comedic art.

Strong support also comes from Louise Ross, Bonnie Grace, Jennifer Bennet, and a host of roles portrayed by Stan Jenson, who is one quick-change artist indeed.  It must also be noted that the role of Cecile LeRoux and that of the sexiest looking, moustachioed, French gendarme I ever saw on a stage, belongs to theatre founder Colleen Kelley.  Her performance is an absolute hoot, and one not to be missed.

In the technical department extremely high marks go to set designers John Meyers and Colleen Kelley for a visual feast for the eyes, especially the set and decorations in the richly textured second act. Complimenting the overall set design are the costumes of designer Peter Mins.  His costumes simply sparkle and bring a special verisimilitude to the production, almost becoming an additional character in the play.

“Is He Dead” now onstage at the Arthur Newman Theatre in the Joslyn Center, Palm Desert, runs through November 18th.   Reservations and ticket information may be obtained by going online towww.PDSTAGE.com.