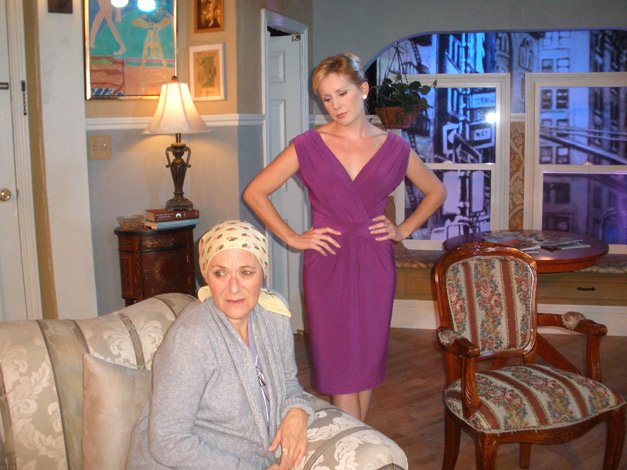 Life is complicated enough under the best of conditions.  There’s no question about that issue.  And if one brings societal issues of trust, loyalty, and/or betrayal into the equation, then life becomes, for some people, extremely uncertain.  It can even get down right nasty in the bargain.   Trust is a sacred compact between people, and when that promise is compromised, life has a way of unraveling for both parties to the implied agreement.

In “Collected Stories”, currently on the stage of the Coachella Valley Repertory’s new  (one-year) comfortable, and cozy 86-seat theatre at the Atrium, in Rancho Mirage, playwright Donald Margulies, intelligently addresses these societal concerns in his perceptive, two-character cautionary tale of writers and literati.    CV Rep artistic director Ron Celona, has sensitively and seamlessly directed the play and its two fabulous female actors, but more about them later.

Margulies, is a highly respected playwright of some thirty years standing.  He has won the Pulitzer Prize for his play “Dinner With Friends”, as well as the prestigious Lucille Lortel Outstanding off-Broadway play in 2000.  His career is filled with numerous honors and awards for plays both on and off-Broadway.

In “Collected Stories”, the action revolves around two authors over a six-year period: Ruth Stein (Eileen T’Kaye) a 55 year-old university professor and respected short story writer, and her student/protege Lisa Morrison (Erika Whalen).   In the beginning Ruth has doubts as to the talent and writing chops of her young tutorial pupil, but little by little, Lisa wins Ruth’s loyalty and admiration by sheer dint of hard work and the two women become friends and confidantes over time, with Lisa ending up as Ruth’s assistant.

As their friendship deepens, Ruth, at Lisa’s urging begins to relate incidents and anecdotes about her earlier life.  Ruth ultimately shares details of her love affair with the celebrity poet and writer Delmore Schwartz.  There is an on-going and genuine trust and affection between the two women, until one day Lisa confesses that she has written a collection of short stories without telling Ruth.  She mailed off the manuscript to a publisher, and has just been informed that it is now going to be published.   Ruth reacts as if she has just been kicked in the stomach.  Why, she asks, “didn’t you share the manuscript with me before sending it off?”  As her mentor and friend that would have been the normal course Lisa’s project should have followed.  Ruth is disappointed by Lisa’ behavior, especially since Lisa demurs in her answers and in her evasive rationale.  To Ruth it looks like Lisa is withholding something; thus further straining their now unraveling relationship.

Sometime later, when the book is published some of the collected stories written by Lisa, are indeed, the stories and incidents related to her by Ruth.   The bond of shared confidences and trust that initially brought the women together now becomes the instrument that shatters their relationship forever.

The dilemma presented by playwright Margulies, to the characters of Ruth and Lisa, is whether another person’s life and events is suitable material for another to use and co-opt in creating a “new truth”?

Which brings me to the incredible performances of Eileen T’Kaye as Ruth, and Erika Whalen as Lisa, as they grapple with Margulies’ basic premise.  First, their onstage chemistry is absolutely palpable.  And as such, they produce moments of sublime craftsmanship that do not compete, but are moments that compliment one another.  Granted, T’Kaye has the showier part, and boy, does she make the most of it.  Her range of emotions stretch from guarded and private, to an openness and acceptance toward her younger protégé, to the feeling of being violated, as well as, being betrayed by the one you trusted.  It’s a terrific riveting performance.

Whalen on the other hand, has the tough assignment of outwardly appearing as the grateful and eager youth “sitting at the feet of the master”, soaking up wisdom and craftsmanship, all the while harboring a hidden agenda.  It reminded me of Anne Baxter’s performance as Eve Harrington and how she studied Bette Davis as Margo Channing, in the film “All About Eve”.  The occupations are different: writers instead of actors.  But the blueprint is similar and just as effective.

Whalen’s Lisa, and her relationship with T’Kaye’s Ruth is very cleverly drawn by playwright Margulies.  Besides, it’s not easy being duplicitous and ambivalent, but Whalen is so deliciously engaging it’s understandable.  Forget the old lines about Greeks bearing gifts.  Just beware of gorgeous blondes in ski hats and jackets who have literary ambitions.

CV Rep and play director Ron Celona have gifted us with an evening of theatre at its best, and are about to have a genuine hit on their hands.  Don’t miss it !  “Collected Stories” runs through November 11th.  For reservations and ticket information call 760-296-2966.