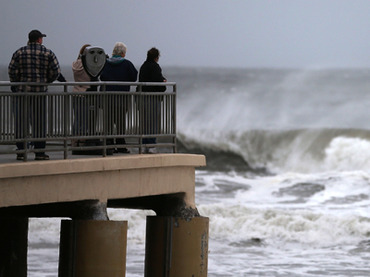 The ‘Frankenstorm’ Sandy is set to be unprecedented in size once it hits the US mainland Monday night. Tens of millions of people could be affected as the hybrid hurricane wreaks havoc from the East Coast to the Great Lakes on Halloween week.

Increasingly dire warnings of powerful winds, power outages, widespread flooding, torrential downpours and even snow are being sounded in New York and other major population centers as Hurricane Sandy continues its trek up from the Caribbean.

President Obama signed an emergency declaration for the states of New York and Massachusetts and District of Columbia on Sunday evening.

Forecasters said Sandy is set to transform into “super storm,” as the tropical storm merges with a winter storm and a cold front, threatening up to 12 inches of rainfall in some areas and heavy snow inland.

“We’re looking at impact of greater than 50 to 60 million people,” says Louis Uccellini, head of environmental prediction for the National Oceanic and Atmospheric Administration.

Set to approach the coasts of the mid-Atlantic states by Monday, Sandy is likely to make landfall in the New York metropolitan area, home to about 22 million people, on Monday night.

The Category 1 storm’s sustained winds of 75 mile per hour are nothing extraordinary, but with hurricane force winds reaching out 105 miles from its center and weaker tropical storm-force winds extending 700 miles, forecasters are on edge about its potential impact.

The powerful gusts are expected to stretch as far inland as Pennsylvania.

“These winds are just amazing in terms of their high speed. I cannot recall ever seeing model forecasts of such an expansive areal wind field with values so high for so long a time. We are breaking new ground here,” a National Weather Service meteorologist in the agency’s Washington, DC/Baltimore office said on Saturday night.

“The size of this [Sandy] alone, affecting a heavily populated area, is going to be history making,” said Jeff Masters, a hurricane specialist who writes a blog for Weather Underground.