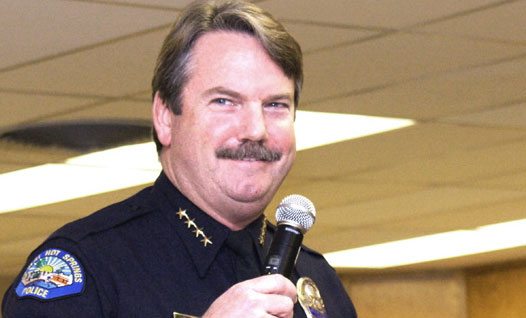 Desert Hot Springs Police Chief Patrick Williams announced today that he would be resigning his position on August 13 to accept the Police Chief position in Petaluma, California. City Manager Rick Daniels reluctantly accepted his resignation and initiated a recruitment process that focuses on an internal promotion to continue the high level of service and community-based policing philosophy of the Police Department.

Chief Williams has served the City for five years beginning in June 2007. He was not only Police Chief, but Assistant City Manager for all Public Safety services including: Police, Animal Control, Code Enforcement, Graffiti Abatement, and Fire Protection. Chief Williams managed the largest portion of the City’s workforce and budget.

“I have never worked with a finer public servant than Patrick Williams. His tireless and imaginative work to improve the lives of the good and decent people of Desert Hot Springs was monumental and established the new baseline. He continuously provided the City Manager and Council with “Best Practices” policies and programs. His years on the San Jacinto City Council gave him great perspective on the needs of the elected officials that consider his recommendations,” said Daniels.

Mayor Yvonne Parks added, “The City’s history will have a chapter on the improvements to public safety under the guidance of Chief Williams that will include significant crime reduction, enhanced parolee supervision, solving cases and securing convictions in court.”

“While we are momentarily saddened that Chief Williams is leaving the City, we are quick to wish him, Shirley, and his family, as well as the City of Petaluma great success and prosperity in the future. The City’s most recent gains in economic development rests on the foundation of a safer community for our residents and businesses,” said Daniels.

Russell Martin, Chairman of the Desert Hot Springs Public Safety Commission offered, “As a former police official I have the highest regard for Chief Williams. He understands the importance of establishing a positive relationship between the community and law enforcement. The result is a consistent reduction in crime and a safer community.”

During his five year tenure with the City of Desert Hot Springs, Chief Williams achieved the following;

Formulated a modern law enforcement organization to protect and serve the City when his 10 predecessors had failed to do so in the previous decade.

The Desert Hot Springs Police Officer’s Association added that they “wished Chief Patrick Williams and his family a successful transition to their new home in Petaluma. Chief Williams has been instrumental in changing the culture of the police department to a point that the POA is more involved than ever before. Chief Williams has been fair and just with not only the sworn members of the agency but the non-sworn. His leadership will be greatly missed, and the POA is committed to continuing the work Chief Williams started to make the Desert Hot Springs Police Department a model of effective, engaged and ethical public safety services in California.”

When asked to comment about his pending move Chief Williams said, “Together with our residents, businesses and visitors, we have built a police agency that effectively fights crime, delivers exceptional service and has improved the quality of life in Desert Hot Springs. I am proud of our employees, the foundation of our organization, for the implementation of our award-winning Community Policing Initiative and for the sacrifices they make on a daily basis in service to this community. Though I fully embrace the new opportunities that lay ahead, my choice to leave the Desert Hot Springs Police Department was a difficult decision.

“I will miss the many friends and colleagues I respect and admire. I am indebted to them for helping me to learn and grow as a leader and as a person. Also, I want to extend my sincerest gratitude to our community for their unwavering and visible support in helping make the Department and the City the best they can be. Our staff, with the support of our council and community, will continue to deliver the exceptional work that has become their trademark and help take the Department to the next level.”

The City of Desert Hot Springs, CA is a community of 28,000 residents in the greater Palm Springs area. I-10, State Highway 62, and Joshua Tree National Park border the City. The City is a well known tourist destination of “Spa City” because of its naturally occurring hot springs-served spas, international award winning drinking water, Cabot’s Pueblo Museum, clean air and unmatched night sky views. The City is a statewide award-winning city for its Community Policing, Ethics, and Economic Development Strategies; Desert Hot Springs was California’s fastest growing City in 2011 and has recently led the region in sales tax growth. www.cityofdhs.org.

The City of Petaluma was founded in 1863 and has a current population of 58,000; Petaluma is located in Sonoma County, in the North Bay Area. Petaluma is a short 32-mile or 50-minute drive from San Francisco and only 90 minutes from Sacramento. City Manager, John C. Brown, (707) 778-4345 begin_of_the_skype_highlighting end_of_the_skype_highligh, JBROWN@ci.petaluma.ca.us, www.cityofpetaluma.net.