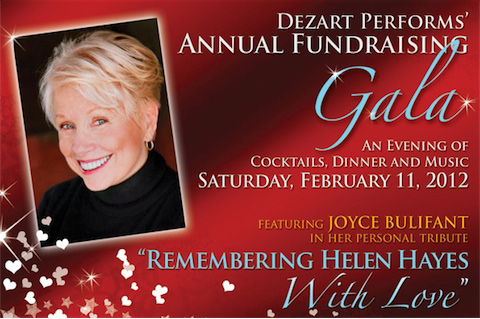 Dezart Performs, the Palm Springs-based performing troupe, holds a play reading Festival every year in April.  At the end of the four-day festival an “audience favorite”, is selected based upon the number of ballots received with the highest marks.  The Festival winner then receives a fully produced production in December: sets, costumes, lights and sound, props, music, the works.  This season’s award-winning play is being presented at The Palm Springs Women’s Club on Cahuilla Road.

The 2011 Festival and Audience Favorite is  “The Old Bird”, a comedy written by playwright Lynn Wells Nelson, directed by Charles Rinaldo, and starring Louise Tonti as Jeanne Clement, the world’s oldest person at 122 years of age.

Also in the cast are: Louise Ross as Nicole, Jeanne’s young friend, who offers strong support (there is wonderful on-stage chemistry between the two women), Andrew Hamling as Henry, John Alex Houlton, as Bernard, and Peter Nicholson as the Reporter.

Louise Tonti has always been a fine actor.  But, as the 122 year-old Jeanne Clement she is absolutely triumphant.  She was born to play this role.  Every look with those wonderful dancing eyes, every gesture, every nuance of her performance is a delight to watch, and rings so true.  For example, watching Tonti age and grow older before your eyes, these are mesmerizing moments not to be missed.  Her performance is not cliché, in that she affects old age, one actually feels one is in the presence of a real 122 year-old person. Great stuff!

The story is set in the 1960’s in Paris France.  The action takes place in a Paris apartment, on a park bench and in a nursing home.  The story, in my opinion however, is more suitable for a TV documentary rather than a play.  By employing a series of quick scenes spaced between longer scenes, the play’s construction blunts the pacing and forward movement of the narrative.   When the play settles on character development and dialogue, even for a short time, the piece seems to gather momentum. Also, I feel the addition of some French/Parisan mood music would have bridged those somewhat long scene changes.

Just when things begin to get interesting between the characters, as in the longer scenes, we jump in another direction only to begin more quick scenes.  I wanted to know more about Henry (Hamling) and Bernard (Alex-Houlton), and even the Reporter played by Nicholson – all supporting roles nicely played, but alas, it was not to happen.  Having said all of the above, the performance by Louise Tonti mitigates any perceived “negatives” and is worth the price of admission alone.

The production produced by Michael Shaw and Daniela Ryan is wonderfully served by a functional set designed by Randallyn Curry; with lighting by Dylan Feldman, and is technically supported by Clark Dugger. There are only a few more performances left to catch this entertaining show. For reservations and tickets call 760-322-0179 or go online to www.dezartperforms.com .