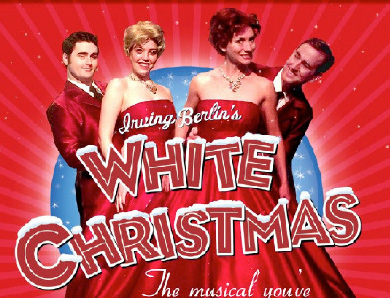 December is almost always a Christmas-themed month when it comes to entertainment and the theatre and the movies in particular.  The Palm Canyon Theatre (PCT) has decided not to break with that tradition.  They have, however, chosen to present a somewhat different approach to the normal Christmas season story.

Bing Crosby and Danny Kaye are pretty much imbedded in the minds of moviegoers, and are tough acts to follow, along with Rosemary Clooney and Vera Ellen if one is planning to produce a stage version.  Undaunted and not intimidated by the beloved movie, the Palm Canyon Theatre mounted its version with a wonderfully technical production, complete with a revolving stage, “Cyc’s” of Vermont, and New York City, and pleasing musical tracks selected by Music Director David McLaughlin.  J.W. Layne, the theatre’s Artistic Director and resident Scenic Designer, has few equals when it comes to sets and lighting designs.  This production has both a sweep for its larger scenes and the intimacy required for the more poignant moments

Luke Rainey as Bob Wallace (the Bing Crosby role), and Erik Bradley as Phil Davis (the Danny Kaye role), are faced with the challenge of stepping into some pretty big shoes.   But Rainey and Bradley’s efforts pay-off as they infuse their own particular brand of comedy and singing efforts into the PCT production.

When word reaches them that their old army commanding officer, General Waverly (Ken Lindsey), who is having difficulties in keeping open a Vermont Inn he has sunk his entire Army retirement into, the two decide to bring their TV show to the Vermont Inn for a Christmas TV Special as a way of helping generate publicity and customers for their former commanding officer and his Vermont Inn.

Along the way, they meet two show business singing sisters Betty and Judy Haynes (Nikki Hock and Jamie Leigh Walker).  Rainey and Bradley take an immediate liking to, and quickly incorporate the “Sisters Act”, into their planned TV Special.  From there it’s a case of boy (Rainey) meets girl (Hock), boy loses girl, boy finally gets girl.  There are a lot of production numbers, gorgeous costumes, and dancing sequences that make  “White Christmas” a pleasant Holiday divertissement.

The show performs Thursdays at 7 pm, Fridays and Saturdays at 8 pm, Sundays at 2 pm through December 18th.  Call the Box Office for tickets and reservations at 760-323-5123.