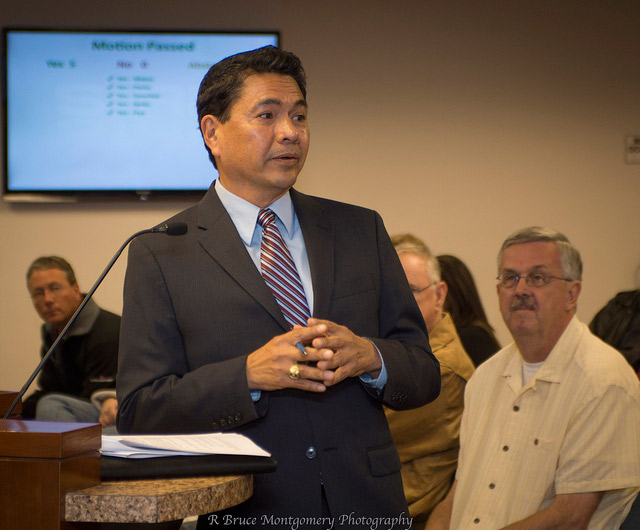 Desert Hot Springs has a new City-Attorney, his name is Steve Quintanilla with the Law Firm of Green, de Bortnowsky & Quintanilla. The cost to the citizens about $420,000 a year, if all goes well. It breaks down to $35,000 per month flat rate for General City Attorney services including Code Enforcement. In case of litigations, the hourly rate would be from $190 for the top-man, $90 for the Law Clerks.

Although there may be challenges in the future, like with many other communities during this downturn in the economy, I am looking forward to working with the City Council and the City Manager and his staff on helping meet those challenges with the skills and expertise I have to offer. I promise this city council, the city manager and his staff and the residents and businesses owners in the City that I will do my upmost to serve the City the best I can.”

Mr. Quintanilla (54) is a partner in the law firm of Green, de Bortnowsky & Quintanilla, LLP which maintains offices in the Los Angeles area and in the city of Rancho Mirage.

Mr. Quintanilla specializes in public agency law and he currently serves as City Attorney for the City of Rancho Mirage, Deputy City Attorney for the City of Cathedral City, and General Counsel for the Rancho Mirage Housing Authority and Rancho Mirage Successor Agency, Greater Palm Springs Convention and Visitors Bureau, Coachella Valley Mosquito and Vector Control District, Palm Springs and Orange County Cemetery Districts and the Southern Coachella Valley Community Services District which serves the communities of Thermal, Mecca and Oasis. Mr. Quintanilla is also well known for the extensive volunteer work he has provided and continues to provide to numerous non profits throughout the Coachella Valley. He currently serves as Pro Bono Legal Counsel for the Rancho Mirage Public Library Foundation and serves as a Board Member of the Regional Access Project Foundation and ACT for MS (Multiple Sclerosis) boards.