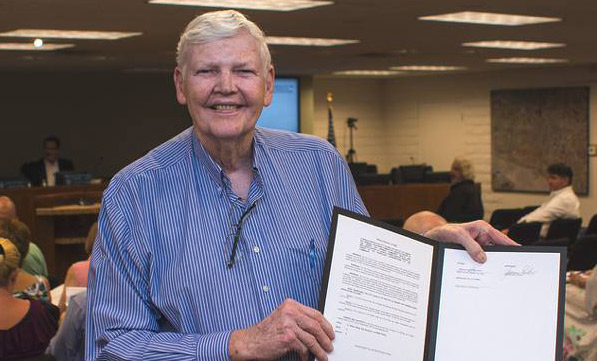 The regular meeting of the Desert Hot Springs City Council was held at the Carl May Center on Tuesday evening, September 4, 2012.

Highlights were presentations to and installation of police officers, the appointment of Max Lieberman to the Community and Cultural Affairs Commission, and the naming of the “Aquatic Center” for John Furbee.

Police Chief Kate Singer presided over the badge pinning and swearing in of three police sergeants and two police officers, and the oath of office was administered by Deputy City Clerk Jerryl Soriano. The sergeants are Phil Ham, Jose Guerroero and Brad Ramos. This marks the first time there has been a full complement of sergeants on the police force. The two additional officers joining the force are Larry Gaines and Jerry Martinez.

The next presentation was the Cal-ID Golden Bear Awards, given to those officers who have successfully identified in a year’s time at least five fingerprints that came up with matches, leading to identification of suspects. It was mentioned that Desert Hot Springs leads other police forces in the number of such hits.

The city council ratified Councilman Adam Sanchez’s appointment to fill a vacancy on the Community and Cultural Affairs Commission (CCAC) for an unexpired term ending in January 2014. Out of numerous applicants, Adam recommended and the council unanimously approved the appointment of Max Liebermann. Sanchez noted that one of the contributing factors was Max’s experience in parades. Sanchez is hoping to see a resumption of a Christmas Parade in Desert Hot Springs.

Approved unanimously by the council, John received a hug from Mayor Parks and a standing ovation from the crowd.

Addressing the council, Furbee graciously and humbly pointed out that he was but one player in the “orchestra” of people that have labored over the years to make this a reality. In particular, he pointed out City Manager Rick Daniels, “apart from whom it would never have happened.”

For all the great photos by Bruce Montgomery; just click!