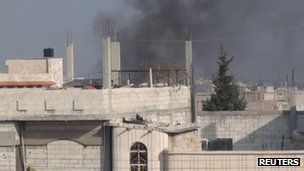 Libya’s former rebels are urging Syrians to follow their revolutionary path. Hundreds of mercenaries, some of them former terrorists, are ready to take up arms again to help overthrow President Assad.

In less than three months, Libyan rebels have gone from being hailed as liberators to being condemned as occupiers, reports RT’s Oksana Boyko. People in the capital, Tripoli, rally almost every week, calling on the armed militia to leave.

For some of Libya’s young men, hooked on adrenaline and unwilling to part with their rifles, Syria seems like the next logical destination.

“We’re all ready to join the Syrian revolution and, with the help of Allah, we’ll make sure that what happened in Libya repeats itself,” one young rebel told RT.

Portraits of Che Guevara are now ubiquitous on the streets of Tripoli, with some rebels even styling themselves to resemble the famous revolutionary.

“With the help of Allah, we can all be like Che Guevara, fighting for peace and freedom around the world,” another rebel said.

And it seems that Che Guevara’s idea of exporting revolutions is being reborn in the Middle East. The Arab Spring has created a buoyant market for soldiers of fortune, who now appear to be moving from one revolution to another. Some are motivated by personal gain, some by conviction, but for others it’s about the adventure. They fight for their own version of freedom, and for now at least, it’s the freedom to live by the gun.

One man’s terrorist could easily be another man’s freedom fighter but, for the United States, it’s now two in one. Abdelhakim Belhadj, one of the leaders of the Tripoli militia, was once on the CIA’s most-wanted list. Today, he is the face of democratic Libya who, according to RT’s sources, led a group of several hundred Libyan rebels to Syria just last month.

The new Libyan authorities are all too eager to wave goodbye to the unruly gunmen who helped them get into power. And it seems the new ruling authority in the North African country is encouraging the export of its warrior heroes to another battle front.

“We want to help to support the Syrian people, because they are facing the same situation as we faced before,” explains Mohamed Alhuraizi of the Libyan National Transitional Council. “We appreciated the help that came to the Libyan people, and if we could provide the Syrian people with any help to get their freedom, I think we should do it,” he says.

The use of soldiers of fortune is hardly new in this troubled region. Middle Eastern rulers used them for centuries as safeguards against their own populations. Now it now looks like the story of the region’s mercenaries is continuing in a new – and no less bloody – chapter.