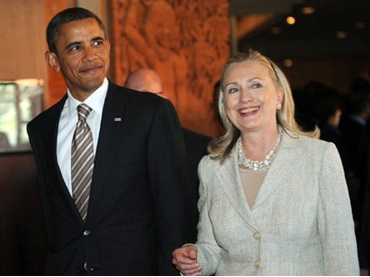 The end of the year is a time to look back at the moments — especially the good — that came during the previous 12 months.

As the world reflects on what came out of 2011, a new poll from Gallup reveals that the general consensus out of America is that a few people really stood out this year in particular, glorified by the public for their great contributions to the globe. Who are the most admirable men and women of 2011? A sample of adults polled by Gallup say President Obama, Hillary Clinton and George W. Bush.

Never mind the White House endorsing three wars this year (one in Libya which Congress wouldn’t even concede to), executing American citizens, allowing for the US military to indefinitely detain its citizens or a crushing economic climate that has all but bankrupt the country! A survey of 1,019 adults carried out in mid-December by Gallup reveals that the Most Admired Man and Most Admired Woman of 2011 are Barack Obama and Secretary of State Clinton, respectively, each garnering 17 percent of the vote.

On the list of men, George W Bush is a distant second with 3 percent of the vote, followed by Bill Clinton, Reverend Billy Graham, Warren Buffet, Newt Gingrich and Donald Trump. On the list of women, Oprah Winfrey came in second with 7 percent, followed by first lady Michelle Obama, Sarah Palin, Condoleezza Rice and Laura Bush.

One can’t help but ask, what is more bizarre? That Americans overlooked the fallacies of the current administration and have neglected to recognize that this is the same President Obama who has seen his job approval rating hit an all-time low during 2011; or that Americans also still recognize and admire the administration that a term earlier ravaged a reign of terror on the world and have since gone three years without—literally — offering anything to the US people?

Is the country running out of super heroes? Or has America been lost in some sort of time warp that has rendered politics impossible to fathom and advance beyond 2001? Maybe, just maybe, the US is hungrier for a third George W Bush term more now than ever. Whatever it is, the results can’t help but cause the rest of the country to consider how, less than a year from Election Day, the next vote might be all too pointless.